Back for a fifth time in the Purge franchise, The Forever Purge follows a familiar, blood-stained path. Fans will surely lap it up.

Franchise film-making has been a tradition in horror for almost a century now. Without doing any research and just thinking off the top of my head, I'd imagine the Frankenstein, Dracula and Mummy movies back in the 1930s set the buck-making ball rolling.

From Alien to Zombieland, it’s become a highly lucrative form of film-making, so The Purge has many peers.

Up until now, the films were written and directed by James DeMonaco, and set in near-future USA where there is no crime, but its population celebrates an annual national holiday known as the Purge, a day when all crime, including murder, becomes legal for a 12-hour period.

This fifth film was also written by DeMonaco, but was directed by Everardo Valerio Gout. Other than that, though, it’s pretty much business as usual. 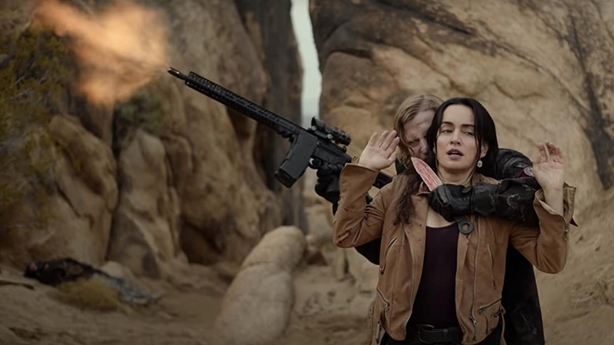 It’s set in 2048, eight years after Charlene Roan's presidential election, the New Founding Fathers of America (NFFA) have regained control and re-instituted the annual Purge with its original rules.

The focus is on Mexican couple Juan and Adela, who illegally cross the border into Texas to escape from a Mexican drug cartel and build a new life, with Juan working as a farmhand on the Tucker family ranch while Adela begins working near Austin.

All’s pretty much fine until the eve of the next annual Purge, when Juan and Adela join a migrant community behind a walled sanctuary with armed security to protect them from gun-toting racists called the Purge Purification Force who intend to kill people they consider non-American.

Things really kick off when the purgers decide to, you know, keep on purging. Hence the title of the film.

Can The Forever Purge be stopped?

What follows is a fairly predictable but enjoyable yarn, dressed up with some angry social commentary.

This film won’t change the world, or stop at film five. But it is fun - and pretty much what the world would be like if the Twitter-verse ever became reality.