The broodingly incendiary Birds of Passage will keep you captivated until the exhausted conclusion as a feud between two families of the Wayuu people of Colombia ratchets up the drama to breaking point.

The proud Wayuu people live out on the isolated Colombian plains, fiercely attached to their ancient traditions, customs and rules of behaviour. The action, based on actual events, begins in the mid-1960s as the young bachelor Raphayet (José Acosta) seeks the hand of, but cannot as yet afford marriage to, Zaida (Natalia Reyes). To win her, this serious, doggedly determined young man must assemble a valuable dowry, involving herds of goats and valuable necklaces.

He makes a deal with his cousin, a much older, local big wig for the supply of cannabis - translated as 'hemp' in this instance, the fibre of the plant -  to US Peace Corps volunteers. They are spending time locally, distributing anti-Communist propaganda. Through the deal, Raphayet aims to earn enough to secure the marriage. In truth, the seeds for terminal strife have been sown as soon as the youth sets about amassing the dowry, teaming up to do so with an impulsive friend, who is not of the Wayuu people.

In time, Raphayet convinces Zaida's fiercely proud mother Úrsula (Carmiña Martínez) that he is the best husband material available, although her superstitions have made her wary. 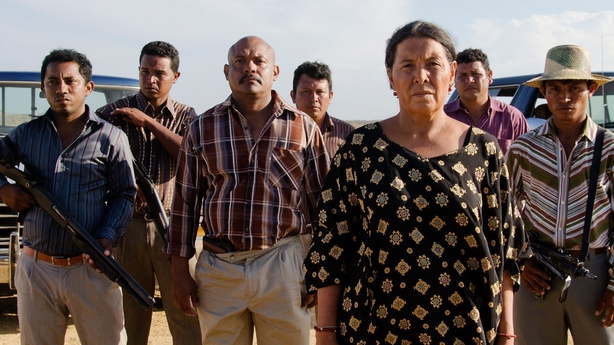 These furtive beginnings in the drug industry lead in time to excessive wealth, in theory, for at least two families of the Wayuu. However, it appears to escape the families' attention in this blind group-think, that power, wealth, greed are generally ruinous.

For all their codes of loyalty and self-protective strategies, the Wayuu are rarely, if ever, seen to question the increasingly lucrative drug racket and its implications. They do not appear to imbibe the drug themselves, and alcoholic indulgence is frowned upon.

Moreover, news of the exact purpose is kept hush hush. 'Do you need this much hemp plant for ointment?,' an innocent worker asks, to some sniggering by those in the know, who are stripping the leaves from the plants.

It is not either that it is a matter of mere subsistence, or trying to make a living. The tribes-people almost unwittingly become plutocrats, living in a kind of smug, flinty prosperity. They become circumspect about rivals and fiercely protective of their business patches.

Power built on drug exportation certainly corrupts and this masterful, compelling saga sees the implosion of the tribe in a vicious bloodbath. Meanwhile, the film is interested in beauty too, incorporating the exotic bird life and the stark, watery landscapes of Colombia with a highly imaginative use of close-up.

A baleful score adds the right ingredient of sinister catastrophe coming around the corner as the families  cause tit-for-tat affront to each other, until dishonor and insult is almost submerged in the maddened feud. Murders are committed casually, coldly, there is not much regard for life.

Despite their elaborate code of honour and the apparent moral tenacity, the Wayuu have been suckered in by the Gringos. They cannot resist the allure of wealth, a nice house, plenteous flocks, machine-gun toting lackeys, a rather dull, pretentious luxury.

It’s the mafia transported to tribal Colombia in effect, and Birds of Passage will hold your attention as you try and anticipate what dreadful death-dealing will come next. Spell-binding. See it at the IFI from Friday.