In terms of cinema history - and most other forms of history, it must be said - we tend to paint people who accomplish great things as some kind of superheroes. Special people. Great men. Great women. Celebrities. The kind of person who doesn't have to endure the ordinary things the rest of experience in our normal lives, whatever 'normal' is supposed to be.

But Neil Armstrong wasn't that special, though what he achieved was truly remarkable. He was just another flawed human being trying to cope with all that life throws at us. He was also the First Man on the Moon, and therein lies this story.

Director Damien Chazelle has once again taken a risky leap with his latest film, which is as far removed from La La Land as that was from its predecessor, Whiplash. But, just like his first two films, First Man is a pretty singular, thoroughly enjoyable and compelling experience. 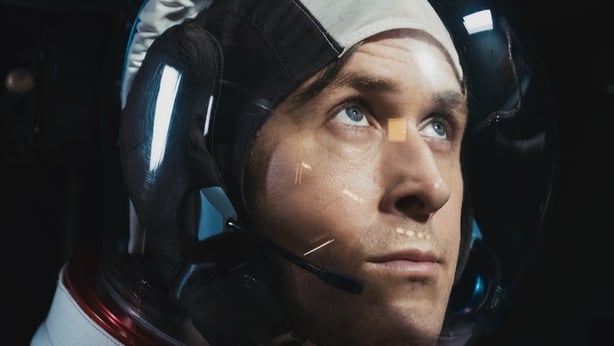 La La Land star Ryan Gosling does a fantastic job as the lunar-bound Everyman, a US test pilot who becomes a member of the American space programme. It's a rather cerebral role as Armstrong as portrayed is a man of few words, and a troubled one at that, as he struggles to come to terms with a family tragedy.

This is a way of explaining that if you're going to see First Man and expecting a gung-ho, 'can do', Gawd bless 'Merika blockbuster, you're in for a surprise, because this is much more of a slow-burner, as much a look at the man as the miracle. Being 'Merikan's incidental. The film's humanity shines through.

Claire Foy gets a little under-employed while still managing to put in a fine shift as his long-suffering wife but, really, this docudrama is all about an obsession that ultimately became a reality in 1969.

The space footage is particularly impressive, but it's the film's almost Bergmanesque approach to the human condition that makes First Man such a rewarding slice of cinema, rather than the predictable exercise in mere flag-waving it could have been in lesser hands.