Tom Cruise plays it for laughs as a soldier of fortune and Russell Crowe hams it up as Dr. Jekyll in Universal's first chapter in a projected Dark Universe franchise.

In this latest reboot of the horror genre favourite, a once powerful deity makes a dramatic return to reclaim their rightful dominion over all mankind after being neglected and dismissed by unbelievers.

But that’s enough about Tom Cruise. Well, at least for now. In this very 21st century trip to the crypt, director/writer Alex Kurtzman has banished all childhood memories of movie mummies Boris Karloff and Christopher Lee shuffling about in the classic horrors of the '30s and '50s.

This modern day mummy, one Princess Ahmanet, is played by Sofia Boutella as a kind of mystic siren reawakened from a millennia long slumber in the deserts of the Middle East to claim the throne denied to her by her father all those years ago. She has predatory sex appeal and suffice to say, she dispenses with those unsightly bandages very early on in the movie. Yes, she is a yummy mummy.

And boy, does she have daddy issues. Add to that the fact that hell hath no fury like an Egyptian princess scorned, Ahmanet is a real force of nature as she romps around the Persian deserts and, later, the dark streets of London.

She is accidentally sprung from her big sleep by Tom Cruise’s roguish and wise-cracking soldier of fortune Nick Morton. He’s a tomb raider, who, along with his very reluctant sidekick Chris Vail (New Girl’s Jake Johnson), loots artefacts in the Middle East before the Jihadis can destroy them and sells them on to the highest bidder.

However, when Nick goes too far with his pilfering ways, he is punished for his transgressions with a curse from Princess Ahmanet which may grant him eternal life (and how very creepily Cruise is that) but also leaves him battling his own demons as good and evil vie for dominance.

To be fair, the Cruiser is likeable in the role of Nick and there is no doubting his megawatt charisma as he ducks Isis bullets and delivers the best lines in a movie loaded down with dull exposition, Egyptology, and your basic standard issue Hammer Horror mumbo jumbo.

This being the first of a planned extended Dark Universe franchise from Universal Pictures, the original home of the creature feature back in the 1930s, we are also introduced to Russell Crowe as Dr. Jekyll and the none too appetising thought of the slew of standalone movies that may be on the way over the next few years.

Grizzly old Crowe hams it up and plays the good/bad doctor as a tweedy archaeologist who knows the true dangers of Princess Ahmanet. After he informs an unbelieving Morton of all this, the two alpha males naturally have an epic ding dong during which Crowe gets to do his best Ray Winstone impression as he transmogrifies from urbane and cultured scientist to snarling Mr. Hyde.

Peaky Blinders star Annabelle Wallis is also along for the ride as Egyptologist Jenny Halsey, a buccaneering heroine who keeps Cruise in check throughout the thankfully short running time before the inevitable CGI farrago of a climax in London town.

At one point, as Princess Ahmanet wreaks her terrible vengeance across the city, her very angry face appears as a fearsome giant cloud billowing over the Houses of Parliament but we don’t know if this is a crude pro-Corbyn gesture from Kurtzman ahead of the UK General Election.

The only time that The Mummy does resemble that Boris Karloff original is in the way the plot staggers about in a multi-genre pile-up that perhaps seems over anxious to cover too many bases - from war flick, Raiders of the Lost Ark, a lazy homage to An American Werewolf in London, to horror, to buddy movie - in one sweeping epic.

In the end, Universal seem to want to have their Dark Universe and suck the life out of everybody else’s. 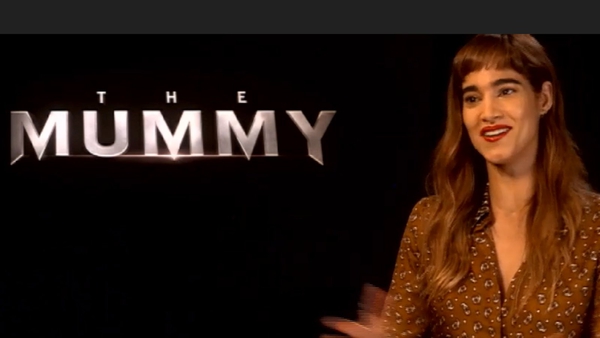 Sofia Boutella on her leading role in The Mummy