With her mercurial, slightly ditsy personality, and her - let's call it - counter-Hollywood approach, Greta Gerwig mightily impressed in her partner Noah Baumbach’s 2012 indie movie Frances Ha - which she co-wrote - and she has shone since in his well-received Mistress America.

So her thing so far has been the bijou, the small-scale, in two movies that are a kind of updated Woody Allen (she had a minor role in Allen’s To Rome With Love) What is it about the 32-year old Sacramento-born actress who, by her own lights, was an "intense ‘child"? It might be that some of that residual intensity has lingered into adulthood and given her these special magnetic powers. She is, in any case, a kind of extraordinary-ordinary girl, she is the kooky, over-earnest sister of the girl-next-door, as it were, too honest and introspective for her own good. 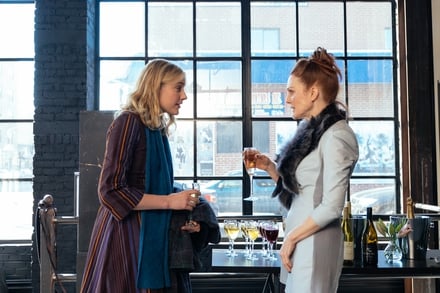 Rivals for the affections of an anthropologist: Maggie and Georgette

In Maggie's Plan, Rebecca Miller’s brilliant comedy of manners, Greta is Maggie, the thick-stockinged, off-kilter Quaker girl who wants a child and has been trying to self-inseminate with the sperm of a helpful friend. (Her bizarre attempt to get pregnant are the wacky distraction of the early scenes, until she falls for the persuasive charms of nervy but married father-of-two, anthropology lecturer John Harding (Ethan Hawke). 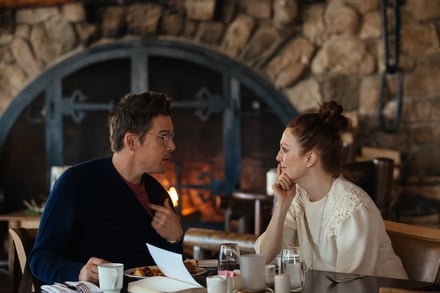 Ethan at table with a slowly-defrosting Georgette

Harding is unhappily married to Julianne Moore’s frosty academic Georgette, whose fierce career ambition has seen him sidelined somewhat. He and Maggie meet casually over a misunderstanding about pay cheques at the accounts office of the university where they both teach, albeit in different fields.

After Maggie agrees to read the first chapter of John's novel-in-progress, the pair find they have loads to talk about. Their early conversations are a kind of neurotic, undammed rush, barely hidden tensions slipping into revelation as the couple draw closer. The complicated love story at the heart of the movie begins when Maggie’s sensible Wisconsin defences are breached by John’s declaration of love.  But love is never simple and the volatile, haughty Georgette is not going away. 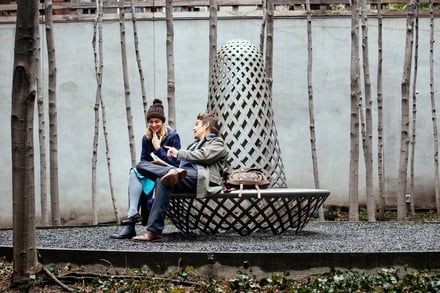 Loads to talk about: Gerwig and Hawke in Maggie's Plan

More than that will spoil – just go and lap up the keen intelligence of the screenplay and bask in excellent performances from Gerwig, Hawke and Moore in what is an absorbing campus menage-a-trois.