At this stage, director Bryan Singer has become an expert in pressing all the right buttons in the ever-expanding multi-verse of the superhero flick. This is his fourth X-Men movie and the ninth in the franchise and Singer's talent for slow motion CGI sequences of cities being uprooted and blown away or vast containers tumbling balletically from transport ships is beginning to make Roland Emmerich and Michael Bay look like uncompromising auteurs.

But before we can savour the wanton destruction of Sydney Opera House and Brooklyn Bridge in X-Men: Apocalypse, we have to sit through more than an hour and a half of screen time of back story and exposition. Clearly, Singer and screenwriter Simon Kinberg are anxious that we are up to speed with the X-Men series’ torturous time shifts and story arcs before we can get down to the serious business of casual world destruction and dialogue delivered with clenched jaws and clenched buttocks.

And just in case you missed anything, we are even treated to a quick summary of human history in a weird little sequence that reminded me of the opening credits of Chris Morris’ news media satire show, The Day Today.

Like most X- Men movies, Apocalypse has the sprawling ensemble cast of a Chekhov novel only with fancier spandex leotards. This time out, we reacquaint ourselves with the mutant outcasts turned reluctant heroes ten years after the dawn of the mutants portrayed in X-Men: Days of Future Past. We are now in 1983. It is the era of Reagan, Pac Man, Rush t-shirts and good old mutually assured destruction as the USSR and the USA face off. Nightcrawler (who, in a nice touch, looks like Michael Jackson in the Thriller video), Magneto, Raven and Professor Xavier are all here as younger versions of themselves but we are also introduced to new arrivals such as Scott "Cyclops" Summers (Tye Sheridan), and best of all, the return of Evan Peter (a dead ringer for Kevin Bacon in Footloose) as Quicksilver.

They face a brand new threat. An Egyptian god from 2600BC called En Sabah Nur, who now happily goes by the name of Apocalypse, has arisen from his tomb in Cairo to reclaim his rightful place as master of all humanity. He is the First Mutant and he is played by Oscar Isaac under an armoured suit and a bolted-on face mask.

Apocalypses is a walking 3D printer with an attitude problem and newly empowered, he goes on a recruitment drive to find Four Horsemen to do his bidding, including the ever-conflicted Magneto, who is now living in domestic bliss in Poland and working, naturally, in a metal foundry. Olivia Munn as the sword-wielding Psylocke

By way of introduction, Apocalypse intones, “I've been called many things over many lifetimes: Ra, Krishna, Yahweh. I was there to spark and fan the flame of man's awakening, to spin the wheel of civilization.” He’s a baddie I can get with - his first move is to render the world’s nuclear arsenal redundant with a wave of his hand and the sight of thousands of warheads arcing majestically into the sky and ending up suspended in space is one of the film’s more arresting and beautiful scenes.

However, after several false starts and a lot of faffing around, X-Men: Apocalypse ends up as a ponderous multi-character pile up. The script is clunky and almost devoid of memorable one-liners (the best is an in-joke about X-Men: The Last Stand by way of Return of The Jedi), while the subtlety and more surreal qualities of previous X-Men films is sacrificed for sledgehammer functionality. 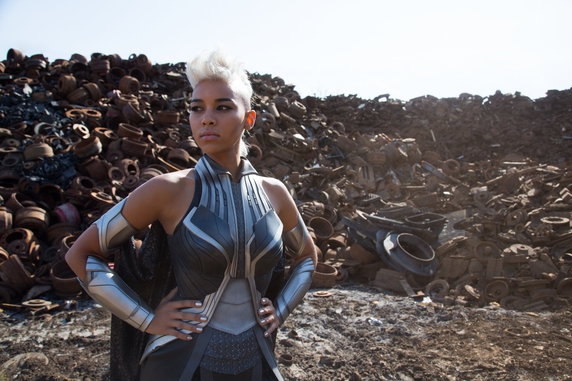 Neither is there any real sense of time or place. The X-Men now operate in a insular world of metal grinding, final, final showdowns and dialogue that struggles to make the transition from comic book to big screen. Excellent actors like Jennifer Lawrence as Raven and Fassbender as the intriguing Magneto are sidelined by the new arrivals and the scenes in the X-Mansion reek of the same smugness as Hogworths.

The most fun is to be had here is with Quicksilver and newcomer Cyclops, the high school kid who can shoot fiery rays of destruction from his eyes. Following the hosannas that greeted the new Captain America movie, X-Men: Apocalypse largely sticks to the formula. This is certainly more of the same; it’s just not very more-ish.