Let's face it, for all the memories, there weren't too many movie fans wishing their lives away waiting for another Rocky. There were six in the can already - what could a seventh outing possibly add?

Well, a lot, as it turns out. Creed is a special film that pound for pound competes with the best heartstring-pulling of Rocky Balboa's 40-year screen odyssey but, crucially, looks to what's ahead in a very exciting way. As the name implies, the gloves are passed on to a new generation here, with Stallone taking on a very different role. You need to take a ringside seat. 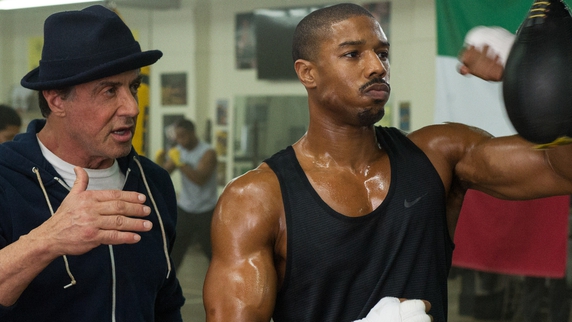 In the opening 1998 flashback we're introduced to Adonis 'Donnie' Johnson (Jordan), an orphan living in state care who thinks with his fists and doesn't know when to stay down. It runs in the family: Donnie is the lovechild of Rocky's late friend and rival Apollo Creed. He was born a few months after Apollo's death in Rocky IV but has inherited his father's gift and looks. And his stubbornness.

Fast-forward to the present and Donnie works a blue-collar job in Los Angeles by day, fights on spit-and-sawdust cards in Tijuana by night and is determined not to use the Creed brand as he makes his way. The trainer in his father's old gym, however, is determined to keep Donnie alive and out of the ring, warning him that he'll tip off every boxing guru on the West Coast if he tries to turn pro. As always, Donnie won't take 'no' for an answer. 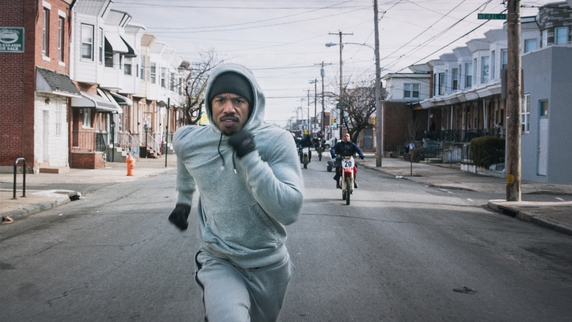 Michael B Jordan is excellent as underdog Donnie

And so Donnie travels to Philadelphia to find Rocky Balboa. Now 70, Rocky has his own Italian restaurant, Adrian's, and boxing for him is only about the pictures on the wall. That is until a rough-around-the-edges young man calls in at closing time and past, present and future collide.

It's funny how the best and worst in this life sneak up on you. Last Spring and Summer there was loads about the Jake Gyllenhaal-starring boxing drama Southpaw (and those abs) but Creed went under the radar. Fast forward a few months and Stallone's latest turns out to be one of the treats of 2016. It's better than even die-hard dust-up devotees could have expected. This is the first time Stallone hasn't penned a Rocky screenplay (he also directed from four of them) but he is working with the best of successors here. In the hands of writer-director Ryan Coogler - the man behind festival favourite Fruitvale Station - Creed beautifully chronicles the growing bonds between Stallone, Jordan and Thompson's characters. If anything, the film is actually more impressive when it comes to relationships than rounds, with great chemistry and many perfectly judged moments of intimacy throughout. Up against a heavyweight like Stallone, Jordan more than holds his own, while Thompson is no afterthought love interest. They're all too good not to see them together again. Great chemistry between all the leads

The most life-affirming story here, however, is not Donnie's or Rocky's, but Stallone's. Having already won the Golden Globe for this character actor role, Oscar glory could be his next month - something that would be a fitting tribute to the late Burgess Meredith, who was nominated for his performance as trainer Mickey in the original movie. Here, Stallone gives audiences the chance to see his own depth and range, and as the man who realises that his body can no longer do what it used to, his hangdog sadness is every bit as special as in Rocky and his other career-best role in Copland. Between now and February 28 it's going to be torture trying to figure out whether Stallone or Tom Hardy in The Revenant deserves that golden statuette more.

It's some job when someone has a career rebirth at 70, but that's what feels like is happening in Creed. If you feel yourself welling up don't worry, because the hard man a few seats over will have something in his eye too.