Tom Hanks takes another role as a decent man battling sinister forces and moral ambiguity in Steven Spielberg’s true story Cold War drama. Hanks plays James Donovan, a noble-minded Irish-American lawyer caught between the machinations of Soviet/USA state intelligence at a time (1957 to 1961) when relations between the East and West plummeted to freezing point and doomsday was a distinct possibility.

Indeed, at one point in Bridge of Spies we see school classes transfixed in terror at those eerie fifties government information films about nuclear attack - houses are blown away, trees bend and snap and citizens are urged to crouch and duck. The threat of annihilation hangs heavy and New York is a viper’s nest of KGB agents.

When one of them, mild-mannered Rudolf Abel (a marvellously droll Mark Rylance), is apprehended by G men after an entertaining cat-and-mouse chase on the subway, his case becomes a cause célèbre of government propaganda and reds-under-the-beds scaremongering.

Donovan is tasked by the state department with defending Abel to prove just how fair-minded the US really is, even at this time of nuclear brinkmanship. It may be to different ends, but Abel’s case is similar to a Soviet-era show trail.

A bromance blooms between the laconic Abel and the passionate Donovan and it is only the Coen brother’s dry and sardonic script (there may even be touches of Burn After Reading in the bungling CIA agents) that saves Bridge of Spies from an all out nuclear assault of Spielberg mawkishness. It’s not a stretch to suggest that James Donovan would be the kind of man that Hanks’ Captain John Miller would have become if he hadn’t died on that other bridge at the end of Spielberg’s Saving Private Ryan.

When Donovan invokes the Constitution and manages to get Abel incarcerated rather than incinerated, the crusading lawyer becomes a public hate figure but also gifts the CIA a bargaining chip for future prisoner exchange. Abel soon becomes the trade-off for all-American fly boy Francis Gary Powers, the U-2 spy plane pilot shot down during a mission over the USSR in 1960. 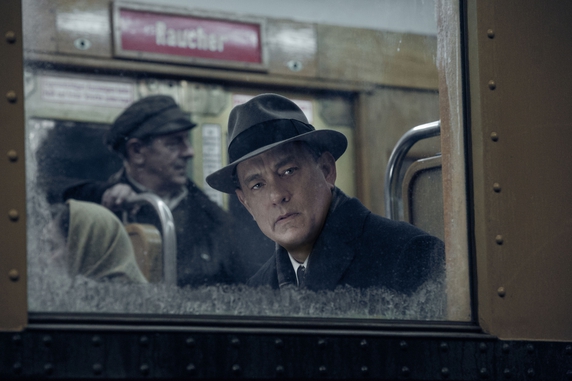 Donovan travels to a derelict, bombed-out East Berlin just as the Wall is going up and finds himself in a Kafkaesque nightmare of communist bureaucracy as he tried to negotiate the deal. In a nice touch, The Lives of Others star Sebastian Koch plays Vogel, the East German state attorney who is brokering a part of the swap and he is a man and with very little time for Donovan’s attempts to bring American truth and decency into the morally-bankrupt universe of the GDR.

Bridge of Spies is never less than brilliantly made, tense and with a satisfyingly twisty plot but Spielberg’s recurring late period theme of honest men doing their best in a wicked world is just a little over-baked. At a time when a new Cold War is setting in, this true-life tale certainly resonates but the message is spoon-fed and rather too sweet.