Thirty years ago, Alain 'Ali' van Versch would have been played by the young Gérard Depardieu, but he is played in Rust and Bone (De Rouille et d'Os) by Matthias Schoenaerts whose animal magnetism is uncannily similar to Depardieu's instinctive brutishness in early films like Les Valseuses and Buffet Froid.

Rust and Bone is a free adaptation from the short story collection of the same title by American author Craig Davidson. Director Jacques Audiard co-wrote the screenplay with Thomas Bidegain. Audiard won the Grand Prix at Cannes for his previous film, the much-acclaimed A Prophet.

Ali is a feral creature of instinct who appears to leap before he looks in just about everything. That might involve quickie sexual encounters with willing females, or the way he handles decisions in his career as a bare-knuckle fighter who aims ultimately to be a kickboxing champion.

As the movie opens, we see Ali walking through the streets of an unnamed French or Belgian town. He is hitching a lift to Antibes, where his sister lives in a small flat with her partner. Ali is carrying his five-year-old son Sam (Armand Verdure) on his shoulders.

The boy appears to be asleep as the cars and vans pass by, their drivers refusing to pick up the hitchhikers. Then suddenly Sam rears his head up hopefully - he is not asleep after all. In its own way, that image is like a paradigm of the film: what looks hopeless may not necessarily be so. If there is a will, there may be a way.

Eventually the pair take the train, so hungry at this point that Ali is forced to walk through the carriages to find food. They find some leftover edibles and wolf them down desperately. On arrival in Antibes, their destination, they move into Ali's sister's cramped flat.

Shortly after, Ali finds work as a nightclub bouncer. One night a girl called Stéphanie (Marion Cotillard) gets a bloody nose in a fight, and Ali offers to drive her home. His hand has been damaged in the melee so he asks her can he accompany her to her flat to get some ice. There he meets her sullen boyfriend, and Stéphanie is impressed by the way Ali manages to put the control freak in his place. As he leaves, Ali tells her that he has left his phone number if she ever needs his assistance again.

Stéphanie works as a whale trainer and dancer at an adventure park called Marineland. One fateful day, an orca breaks loose and attacks her as she dances to Katy Perry's Firework. The scene is pure cinematographic brilliance, filmed mostly from below the water’s surface (as is another later scene in the movie which is equally pivotal). This is a movie of many memorable scenes.

The following scene, where Stéphanie wakes in hospital, is both chilling and disturbing. When Ali left her his number sometime beforehand, neither could have anticipated Stéphanie's traumatic experience. Now she calls him up and he diffidently tells her that he learned of her dreadful accident on the TV news. He offers not one sympathetic word, which, peculiarly, does the trick and only enhances his attractiveness in Stéphanie's eyes.

It would be wrong to say that Stéphanie's predicament brings out a protective side in Ali. It's more that he is so unaware of himself that he is the same about Stéphanie's new situation. This is all new territory, and they are both feeling their way awkwardly. But there is still a particularly shocking event in Ali's life which is yet to occur...

Rust and Bone is a fast-paced exercise, telling the story of two people trying to overcome painful obstacles to make their lives worth living. The film works because of incredible performances, but in all the inflated emotion a certain subtlety is lost. 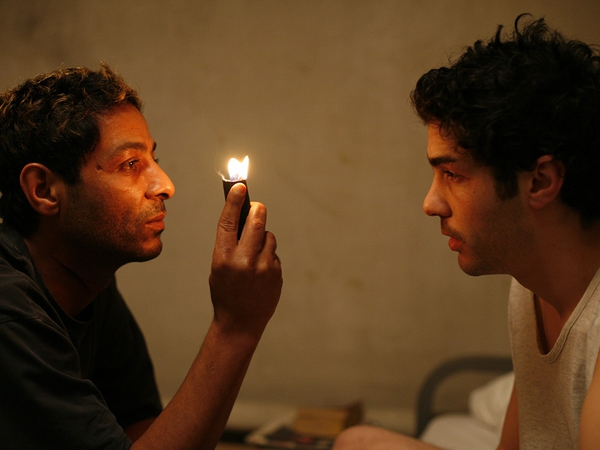