Dubliner Aidan Turner said playing a character with Parkinson's was important to get right because you do not often see a protagonist suffering with the condition.

The Poldark actor, 39, will star in new ITV thriller The Suspect.

The five-part series, adapted for the screen by Gangs Of London writer Peter Berry, was the debut novel of Michael Robotham.

The actor plays Doctor Joe O’Loughlin, who appears to have the perfect life but, after the death of a young woman and his diagnosis of early onset Parkinson’s, the truth begins to reveal itself.

He said: "I met a musician called Drew Hallam who was diagnosed with early onset Parkinson’s around five years ago when he was 35.

"Something struck me in one of the early conversations we had when he said how difficult it was when you’re young with this condition.

"He said there are support groups, but Parkinson’s doesn’t generally affect younger people. To speak with somebody so open and truthful about his experience was very beneficial."

The actor said they discussed how he would portray the tremors often associated with Parkinson's in the new drama.

"We wanted to keep the tremor subtle because Joe has been recently diagnosed, but enough for it to read on camera.

"Getting it right was important. Parkinson's affects different people in different ways.

"We don’t often see a leading character who has Parkinson’s, so it was interesting to tackle that," he said.

Turner said he made a "quick decision" to be involved after reading the scripts, and described playing a protagonist who is unpredictable and unreliable as "refreshing".

He said: "I was gripped. It was the ambiguity of the piece that drew me in straight away.

"The story has an eerie feel to it from the beginning and as an audience we’re not sure what part Joe has to play in it.

"This was thrilling for me when I first read the scripts. Joe is definitely a flawed character, which is interesting to play."

Turner revealed he has "very fond memories" of making the show, adding that it "felt good" to shoot the entire series in London.

He said: "I really enjoyed working on The Suspect. The role was challenging, the material was strong and everyone looked like they were having fun on set everyday.

"We filmed all over London, including around the Coal Drops Yard area in King’s Cross, which has completely changed in recent years. It’s a cool place.

"It’s rare these days to get a show completely set in the city. I don’t think I’ve ever shot anything that is completely based in London." 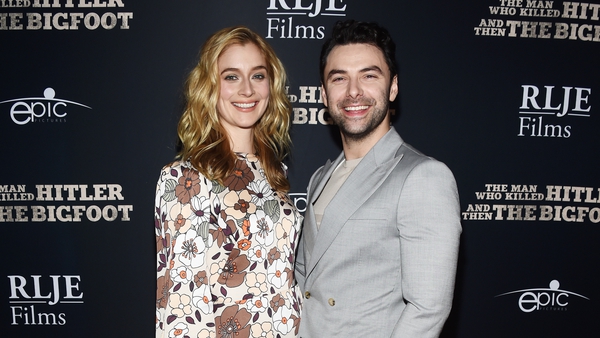 Aidan Turner and Caitlin FitzGerald reported to have wed