Ukraine's Eurovision Song Contest winners the Kalush Orchestra have said they are planning a tour of Europe to raise money for the army as it continues to put up fierce resistance to Russian forces more than 80 days after they invaded the country.

Frontman Oleh Psiuk told a televised news conference in the western Ukrainian city of Lviv that the group would soon announce on Instagram where it would tour.

"At every performance, we are going to collect funds for the needs of the army," he said.

Psiuk said he hoped Ukraine would host Eurovision next year and thanked the defenders of the besieged Azovstal steelworks in the southern city of Mariupol for their courage in holding out for so long.

Fighters in the last stronghold in Mariupol have started to surrender, but a Ukrainian presidential adviser said their defiance had changed the course of the war.

On Monday, Kalush Orchestra returned home after their emotional Eurovision Song Contest victory, with frontman Psiuk saying he hoped to raise hundreds of thousands of dollars for the war effort by selling the Eurovision trophy.

The rap group, which received special permission to leave the country to attend the Eurovision final in Turin, won the song contest last Saturday with an outpouring of support from the public - giving their compatriots a much-needed morale boost after almost 12 weeks of war.

They were greeted at the border with Poland by servicemen and women whose cause the group had championed in Turin.

Psiuk was presented with a bouquet of yellow and blue flowers - the colours of Ukraine's flag.

He reunited with his girlfriend before he and his group launched into an impromptu version of Stefania, their winning Eurovision song.

Stefania - a tribute sung in Ukrainian to Psiuk's mother that fuses rap with traditional folk music - was lying fourth after national juries voted but stormed into top spot thanks to a record score during the second stage of voting by viewers.

Ukrainian troops watching on television had hailed the win, with Psiuk making a plea for help at the end of the live performance for the besieged city of Mariupol and its Azovstal steelworks.

"Eurovision is a very important thing, especially, this year. But the life of so many people – this is much more important," Psiuk said at the border.

Of the plan to sell the trophy, he said: "There are people who are simply ready to donate. This is simply to motivate them a bit more – they may own this trophy. Someone might think it is cool to have a Eurovision 2022 winner's statuette at home." 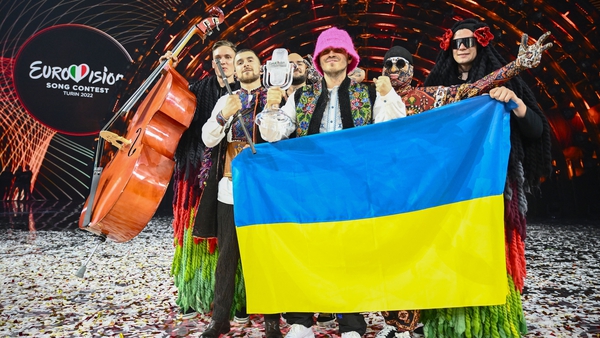 Eurovision winners Kalush Orchestra will celebrate 'after the war' in Ukraine