Will Smith was joined by his wife and children at the Vanity Fair Oscars after party, where he clutched his award and performed one of his hits.

The film star and rapper, 53, was named best actor at the 94th Academy Awards ceremony for his performance as Richard Williams, the father of tennis icons Venus and Serena Williams, in King Richard.

However, the victory has been overshadowed – after Smith stormed the stage and hit host Chris Rock in the face after the comic made a joke about his wife Jada Pinkett Smith's hair loss.

Arriving at the Wallis Annenberg Centre for the Performing Arts in Beverly Hills for the post-ceremony event, Smith posed with Pinkett Smith, 50, sons Trey, 29, and Jaden, 23, and daughter Willow, 21.

The Fresh Prince of Bel-Air star later took to the dance floor while clutching his Oscar to perform his 1998 hit Gettin’ Jiggy Wit It.

Smith was greeted by stars such as Lupita Nyong’o and Trevor Noah as he arrived at the bash, according to The Hollywood Reporter.

DJ D-Nice shouted Smith out as he danced to his own hits, including 1991’s Summertime, which he recorded with DJ Jazzy Jeff.

Will Smith is at the #VanityFairOscarParty dancing with his Oscar to 'Gettin Jiggy With It.' pic.twitter.com/PvKrRICQEN

Kim Kardashian, who was without her boyfriend Pete Davidson, posed in a neon blue body-con Balenciaga gown with a train.

Kendall Jenner, meanwhile, opted for a black gown and wore her hair in a ponytail.

On the red carpet, Kourtney Kardashian posed with her fiancé Travis Barker from the rock band Blink-182, both wearing black.

Joan Collins was joined by her husband Percy Gibson and wore a glittering silver gown.

Also among the stars at the bash were Bond star Lashana Lynch, Rege-Jean Page of Bridgerton, the band Haim, actress Julia Fox and Coda star Troy Kotsur, who showed off his best supporting actor Oscar for the cameras. 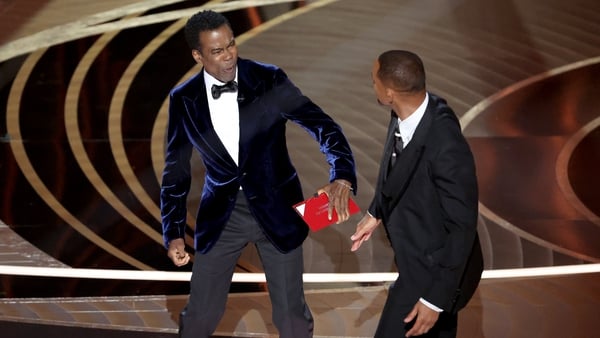 Will Smith hits Chris Rock on stage during Oscars