Taoiseach Micheál Martin is among those who have paid tribute to veteran RTÉ broadcaster Donncha Ó Dúlaing, who has died at the age of 88.

Mr Ó Dúlaing, from Doneraile, Co Cork, was known for his cultural and traditional music programmes.

His broadcasting career spanned more than half a century during which he presented radio and television programmes that had wide-ranging appeal.

Very saddened to hear of the passing of Donncha Ó Dúlaing.

An outstanding broadcaster who brought much joy to his loyal listeners over the decades.

'Highways and Byways' reached parts of Ireland that didn't always get attention.

His interviews will live long in the memory. https://t.co/RjMdwvYdwX

Micheál Martin has called Mr Ó Dúlaing "an outstanding broadcaster who brought much joy to his loyal listeners over the decades".

"Highways and Byways reached parts of Ireland that didn't always get attention," Mr Martin wrote on a social media post.

"His interviews will live long in the memory."

Director General of RTÉ Dee Forbes said that Mr Ó Dúlaing was a proud Corkman whose long-running programmes were "as iconic as the man himself".

"A tireless fundraiser, his charity walks were as legendary as the many legends who crossed his path, from Eamon de Valera to Pope John Paul II, Mick Jagger to Gene Kelly," Ms Forbes said.

"When he closed his beloved parlour of dreams with the final Fáilte Isteach in 2015, it brought to an end a 50-year career in broadcasting.

"His contribution to public service broadcasting, to Irish life and Irish lives, was immense."

Head of RTÉ Radio One Peter Woods said that Mr Ó Dúlaing was a central part of Irish cultural life during his career as a broadcaster.

"The word 'legend' is sometimes used lightly but he was that," Mr Woods said. 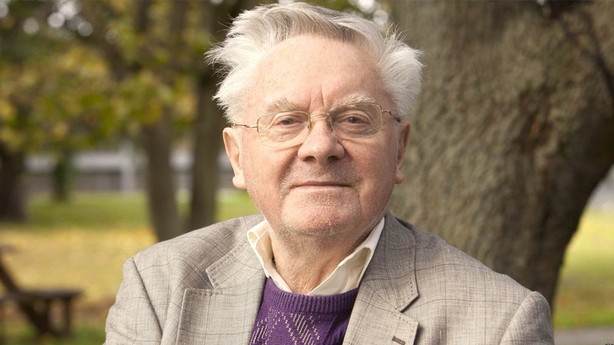 "He loved the road and, in an era, when radio outside broadcasts usually came from a mobile unit, Donncha adapted early to technology and ranged across the country with a tape recorder. He had great enthusiasm for radio and presented Fáilte Isteach well into his 80s.

"He said [Christy] Ring's advice was to keep an eye on the ball, even when it was in the referee's hand - that advice characterised the broadcasting career of Donncha Ó Dúlaing. He was a one off."

Many other have also paid their respects to the late broadcaster.

Rodney Rice has left a lasting legacy on Irish journalism

Today wherever you are brónach arís, sad to share the passing of my father Donncha this evening, he was not inclined to stay now that Vera has gone. Ní bheidh a leithéid ann arís. pic.twitter.com/MG2nQbH7df

Still remember his kindness and patience in showing me, a rookie from another RTE department, how to record stuff properly, instead of learning the hard way by bringing back a dud.
Donncha Ó Dúlaing RIP.

My first job at 18 in @radiokerry and I was sent to do my first ever live radio insert for the morning show. It was to join Donncha Ó Dúlaing on a charity walk and interview him. He was so supportive, so helpful and it's something I’ve always remembered. A great broadcaster. RIP

It was my great privilege to call this broadcasting legend a colleague and a friend. Air dheis De go raibh a anam uasail.