Aslan frontman Christy Dignam has told the Ray D'Arcy Show on RTÉ Radio 1 that he is getting ready to release his solo album, The Man Who Stayed Alive, in October.

Speaking on Friday's show, Dignam said: "I feel great. I've just done a solo album, which is something I'd always wanted to do, you know? It's brilliant, Ray. I swear to God, it's amazing.

"Myself and [singer-songwriter] Don Mescall sat down and he kind of did a study of me almost. We put these songs together, we put this album together - just the two of us."

Aslan previously worked with Mescall on the track Too Late For Hallelujah.

"Don went away and he read the autobiography and stuff," Dignam said of their new collaboration. "He used to ring me and ask me certain things - how I felt about certain things. So, when I look at the songs, it's amazing the way he got into my head. He really did.

"The album's out in October. The first single is out in the middle of August, a song called High... It's kind of about the pandemic and how it's changed the world and stuff. You just want one moment away from that, liberation from that and you kind of find it in the person you love."

"It's a natural high," offered the host.

Returning to his 'day' job, Dignam said it is "amazing" to be back performing with Aslan.

One of the last times we gigged in Kerry was at the Rose Of Tralee 2019! Such an amazing turn out!!
Looking forward to playing to an audience again, even though it will me a much smaller crowd..... on 12th August at the Gleneagle INEC Arena Killarney! ??????@GlenINECArena pic.twitter.com/2CGJcySojp

"We're doing a gig in the INEC on the 12th of August," he added. "It's great just to be back gigging again." 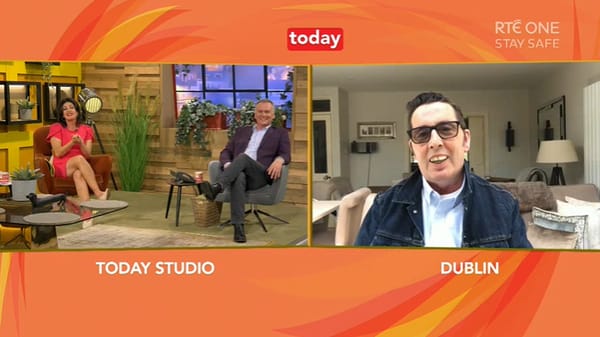