A performance by Bob Dylan at Slane Castle in July 1984 will be among the tracks to feature on the next instalment of the music legend's Bootleg Series in September.

The weekend of Dylan's concert at Slane Castle was marred by violence in the Co Meath village.

"What was effectively a very successful concert has had this dark shadow cast over it because of what happened in the village of Slane," Slane Castle owner Henry Mountcharles told RTÉ News at the time as he deliberated on whether to host more shows at the iconic venue.

Back to the music, in the liner notes for Springtime in New York, Damien Love writes: "And that's the real story of this gloriously untrammeled collection. The songs

"The songs stripped free of trappings, tampering, passing tastes, and judgments. The songs broken down to the sound of people really doing this, right now, acting on instinct. The songs rough and rowdy, bruised and tender, joking and crying, nagging and striving and yearning.

"The songs were always there, and here they are still, keeping pace with us." 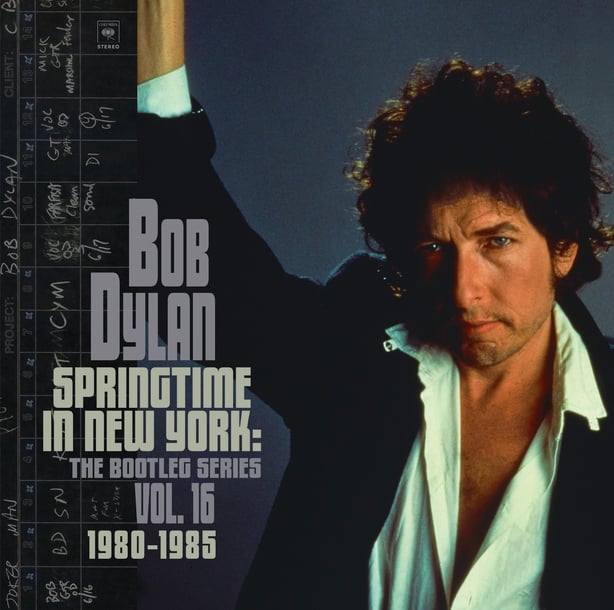 3. Jesus Met the Woman at the Well – Rehearsal

4. Mary of the Wild Moor – Rehearsal

10. Let's Keep It Between Us – Rehearsal

3. I Wish It Would Rain – Shot of Love outtake

6. Don't Ever Take Yourself Away – Shot of Love outtake

6. Someone's Got a Hold of My Heart – Infidels outtake

7. This Was My Love – Infidels outtake

3. Baby What You Want Me to Do – Infidels outtake

5. Angel Flying Too Close to the Ground – Infidels outtake

10. I and I – Infidels alternate take

11. Death is Not the End [full version] – Infidels outtake

4. Tight Connection to My Heart (Has Anybody Seen My Love) – Empire Burlesque alternate mix

5. Seeing the Real You at Last – Empire Burlesque alternate take