TV personality Teigen has been embroiled in a bullying scandal and issued a public apology promising to privately contact anyone she has wronged.

US designer Costello said she once targeted him and made him feel suicidal.

The 36-year-old said Costello left her with "deep insecurities" after a perceived snub over a dress.

Costello responded on social media and said he was "surprised" by the claims and invited Lewis to contact him privately.

He offered an apology and said: "I don’t take accusations of body shaming lightly".

Costello also said he is in a "vulnerable moment" and is suffering from poor mental health.

London-born Lewis said she was asked to take part in a fashion show in 2014 to raise money for charity and Costello was assigned as her designer.

She said she was made to feel "very awkward and uncomfortable" as the dress was a sample size and Costello and his team "clearly did not want to alter it".

Lewis said at the next fitting, on the night before the show, Costello "refused to turn up" and no longer wanted to dress her.

Writing on her Instagram Story, she added: "He abandoned his commitments to me and the show which made me well aware that I wasn’t the body type required."

Lewis said she was left "embarrassed" and "deeply hurt" by the incident.

She wrote: "Because I didn’t look like a model size, I was not permitted to walk in his dress. 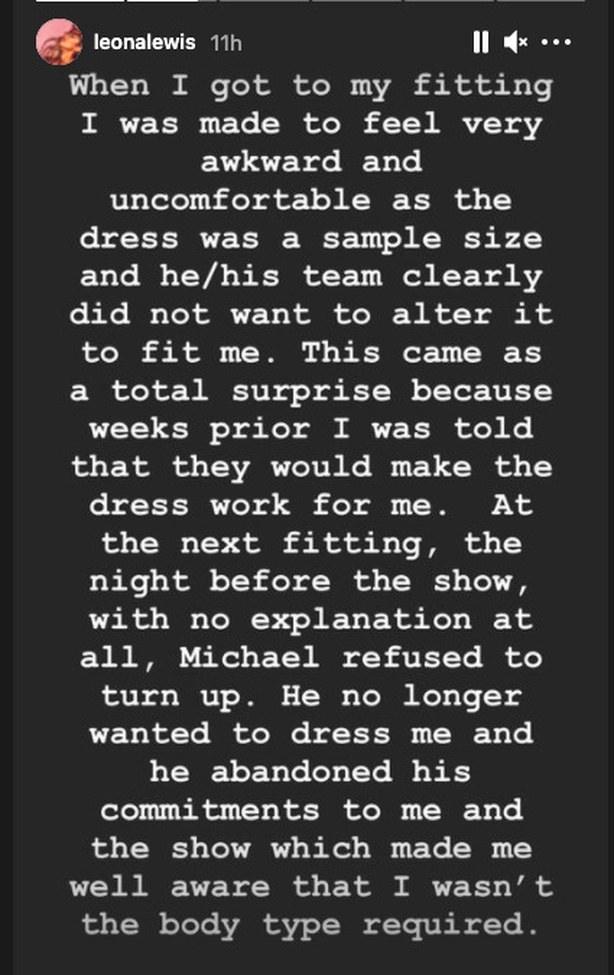 "I had to sit in the audience and was asked by press why I didn’t walk in the show. I remember having to come up with excuses as I was so humiliated by it all."

The Bleeding Love singer added: "I was left with deep insecurities after this and I’ve had to work hard over the years to love my body. I know that his (Costello’s) designs are catered to women of all sizes now, and I’m glad he saw the light over the years."

Lewis also called for Teigen to be forgiven for her alleged bullying.

She said: "We all make mistakes, I know I have, but at this time I feel that when people apologise (Chrissy) and show sincere remorse and rehabilitation for their actions, we should embrace them and not try and kick them when they’re down."

Lewis said she wishes Costello "so much love and healing".