The editor of the Sunday Independent, Alan English, has said Sinéad O'Connor has contacted him about becoming a columnist in the newspaper.

English's revelation follows O'Connor's announcement that she is retiring from singing.

He told the Marty Morrissey Show on RTÉ Radio 1 that "she was the one who made contact with me".

"Some people may be surprised by that. I was," he continued.

"She reached out on Twitter first and just as I was taking that on board, an email came in to my inbox from Sinéad and she was quite keen on the idea of writing for us. It's not every day that an international rock star megastar expresses an interest in writing for a humble newspaper."

English said he had a couple of conversations with O'Connor and had read her just-published memoir, Rememberings.

"She's a fascinating woman," he added.

"She's had an extraordinary life. I think she has everything it takes to be a great columnist, so I'm looking forward to having her in the paper."

On Sunday, O'Connor told the Brendan O'Connor Show on RTÉ Radio 1 that she plans to focus on writing following her announcement that she is retiring from singing.

The Irish music legend said she is "not at all" upset after making her decision, adding that she is "looking forward to doing other things in my life".

This is to announce my retirement from touring and from working in the record business. I've gotten older and I'm tired. So it's time for me to hang up my nipple tassels, having truly given my all. NVDA in 2022 will be my last release. And there'll be no more touring or promo.

"My interest is writing, and I would probably continue writing songs for other artists," O'Connor continued.

"If the odd job came along... For example, I'm singing the song for the [Michael] Flatley movie, I'm going to do that. If little jobs like that come along that doesn't involve leaving Ireland and being destabilised and, you know, there's little sums of money or they're great songs, then I would do that. But I do believe I'm past my peak as a singer, and I'd be stupid not to acknowledge that."

Really happy that my last recording is gonna be the one song I always dreamed of singing and haven't yet, Mo Ghile Mear ??????????????
And as the outro song for the Micheal Flatley movie (I dunno it's name). Recording next weekend : )
Can't fuggin wait #FlatelysATotalRide

When the presenter said he was "very sad" to hear that O'Connor was retiring, she replied: "It's not a thing to be sad about, honestly. It's a thing I would much prefer that people be happy for me about because it does set me free from a whole load of things that were quite restraining. And it means I'm exercising extreme self-care, which is very important. Also, being in that job meant I had other dreams that I didn't have time to make come true, such as writing."

Apologies if any upset caused to booking agents or promoters or managers due to my tweeting about my retirement. I guess the book made me realise I'm my own boss. I didn't wanna wait for permission from the men, as to when I could announce it. Also, I'd had a few whiskeys : )

The singer said she had been "back and forth about it with my managers for about six months", describing it as "a difficult decision to come to".

"Last year, 2020, we had a tour booked," she explained. "I had secretly been planning to let that be my last tour. Then, the gigs were rescheduled for this year, and then all cancelled again and rescheduled for next year, where my plan had been to cease touring this year - you know, let last year be the last.

"The other thing is, I've got a bit old when it comes to touring; touring can be very destabilising. You know, you're living out of bags every few days, all 'round different hotels every few days and whatever. That's really a young person's game and it's not also a game for people who would have the mental health conditions that I have. Because the main requirement for managing those conditions would be extreme stability... But basically, I've got older. I don't feel that I'm physically fit for touring, to be fair."

"I've had a ball, and I've enjoyed it, but a wise warrior knows when to retreat," she said.

PS re retiring.... have always wanted to be one of the artists involved in presenting and mentoring on the The Voice of Ireland ... But never was free to do it. Am now : )
So if they ever want me they can contact my managers : )

"The trouble is that because people don't buy records anymore, people are forced after the age that is suitable to be going on the road to make money. I don't really want to be depending on touring in order to make a living. Like, I'm 55 now. I don't want to be doing it when I'm 65 or 75, which I have seen artists out doing.

"Also, this might sound crazy, but it's true if you do some research: people who have radical hysterectomies, the body is inclined to behave approximately 15 years older than you really are, which doesn't mean you're going to die any sooner, but it means that your body ages quicker. So for somebody that's a bel canto singer, it's terribly important that they have young abdominal muscles, for want of a better word. Like, I'm 55, but my body thinks I'm 65 or 70.

"The last thing I would want to be doing is dragging myself around the world when I'm past my peak."

Listen to the Brendan O'Connor interview in full here. 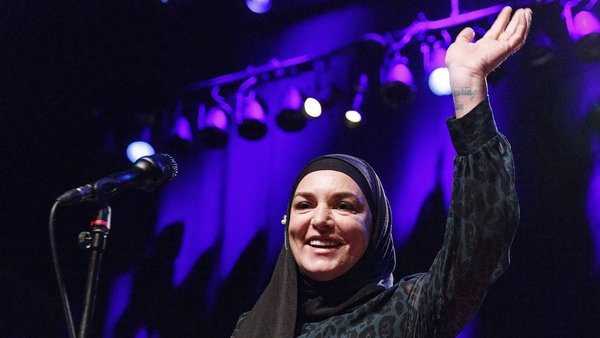