Elliott Gould has said it was a "privilege" watching the cast of Friends shoot to fame and he felt they were all part of the same "extended family".

The MASH star played that part of Monica and Ross's father, Jack Geller, made an appearance in the much-anticipated Friends reunion, alongside Christina Pickles, who played their mother Judy.

'The one where Jack tells Monica that he wants to be buried at sea.'

Elliott Gould recalls his favourite scenes during his time on Friends.

He recalls how the show was 'so human and identifiable.'

He told ITV's Good Morning Britain: "I enjoyed so much watching it tonight and seeing it because it's real, these people are true and they each have a relationship with one another that is very identifiable, we were friends."

He added: "It's very humbling. And it's so gratifying every now and then when something like this becomes so successful, that we can all share it. And the world shares it with us."

Gould, who is also known for his role as Reuben in the Ocean's heist movies starring George Clooney and Brad Pitt, also discussed how it felt to watch the cast shoot to fame over the course of the show.

He said: "It was a privilege to me, and of course at the time that Jennifer was married to Brad Pitt, I was working with Brad Pitt in the Ocean's movies, so we're an extended family.

"We're all sort of related to one another, to right here, on Earth, in this world."

In the reunion special, producers ruled out returning to make more episodes of the sitcom, but Gould said he would be happy to come back if they changed their minds.

He said: "Of course, what a good experience and with the people.

"I don't think it will, but we all come across one another and then we're all members of the same union and I'm a unionist and I believe that we all have this relationship.

"So the answer to your question is, of course."

The Friends reunion is available on Sky and NOW. 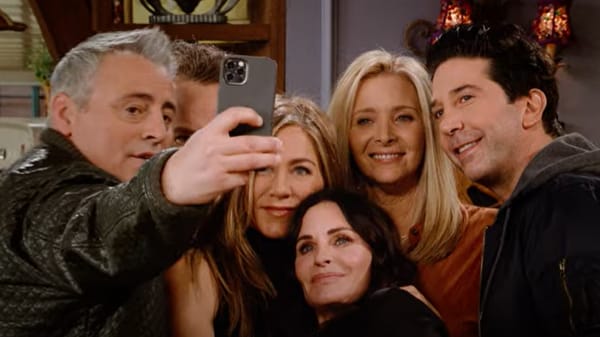