Ryan Tubridy has said tonight's Late Late Show Daffodil Day Special in aid of the Irish Cancer Society is both a celebration and a thank-you.

For the second year in a row, the traditional annual Irish Cancer Society fundraiser had to be cancelled due to the lockdown, and tonight's Late Late Show will see guests including Shane Filan, Jedward and Cavan footballer Oisín Kiernan joining the host to share their stories and appeal for donations.

This Friday night the #LateLate will be dedicated to the work of the @IrishCancerSoc on Daffodil day, which can't take place as normal this year ✨

"Two years without a Daffodil Day - this is the big fundraising drive for them," Tubridy told Áine Lawlor on RTÉ Radio 1's Morning Ireland.

"Since the pandemic, the Late Late Show has found itself in a peculiar role, whereby people have said from a charity, 'Any chance you could give us a dig out?'.

"We've just been flabbergasted by the people listening to this show, the people watching the Late Late Show digging deep every week - €15 million in a year.

"So, when the Daffodil people and the [Irish] Cancer Society came along and said, 'Any chance you could sort us out for another go at this?', we said, 'There's no question about it'. Because cancer, especially in Ireland, is unavoidable. Every family has somebody, somewhere."

"The show tonight is about... strange to say this, to say the word 'celebration' and 'cancer' in the same sentence," he continued.

"To the night nurses, thank you. To the people who swim the Channel or swim around or are walking around yards, thank you. Or to the volunteers who raise money of a weekend, making buns or whatever they're doing, thank you. It's an acknowledgement of what they do.

"The fact that late diagnosis is such a problem now with the pandemic - they're concerned about what the domino effect of that will be down the line. So, it's awareness as well; it's a thank-you as well.

"We're going to be talking to some people who've been down the road and want to say 'thank you', and maybe if people are in a position to help out tonight, that would be tremendous. I don't think we kind of 'shake the bucket' too hard. We simply say, 'Here is what's happening with a certain charity'.

"Tonight, we'll look at Shane Filan from Westlife, who's going to come on. He lost his parents within nine months of each other. Three thousand people came to his father's funeral just before the pandemic. Twenty-five people came to his mother's funeral in the middle of the pandemic - both cancer. He's coming on to talk about that, and to talk about the importance of the bus service [for patients], for example.

They're joining us this Friday night to shave each other quiffs to raise much needed funds for the @IrishCancerSoc. Join us on Friday night ✨#LateLate pic.twitter.com/tE3GvVcRmN

"And, of course, Jedward. I mention them, Áine, because they're good lads. Not since Samson has there been a haircut [like this] - they [will] cut each other's hair!

"They were on with us not too long ago, talking about their mother Susanna, who died from cancer. They're still grieving, of course, but cutting the hair, it's symbolic, obviously, and there's jest in there, of course. But also, it's decent of them to get involved.

"You ask what will people do: watch the show, learn from the show, become aware from the show and, if possible, donate. You don't have to, but it would be lovely, and greatly appreciated." 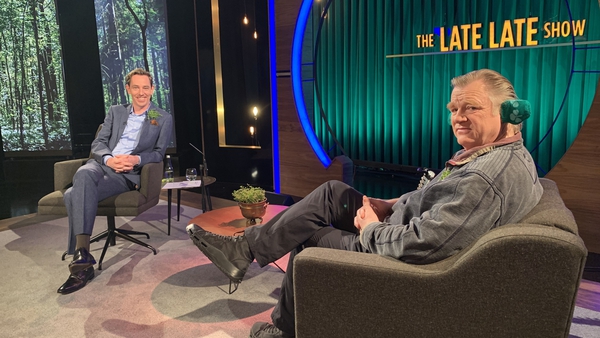