Good Morning Britain and its fans woke up to life without host Piers Morgan on Wednesday, with co-presenter Susanna Reid telling viewers: "It is certainly going to be very different. But shows go on, and so on we go."

'He has been a voice for many of you and a voice that many of you have railed against.'@susannareid100 speaks about Piers' resignation from GMB. pic.twitter.com/sVTcKMwx8N

Morgan quit the ITV show amid the fallout over comments he made about the interview given by Britain's Duke and Duchess of Sussex to Oprah Winfrey. Morgan has stood by his comments.

UK TV watchdog Ofcom had earlier launched an investigation into the comments after over 41,000 complaints. Morgan was involved in a row about his comments with fellow presenter Alex Beresford on the show on Tuesday, shocking viewers as he stormed off.

Addressing Morgan's departure when she first appeared onscreen on Wednesday, Reid said: "A number of people will, of course, know the news, and many of you will not, and will be surprised that Piers Morgan is not here this morning.

"Now, Piers and I have disagreed on many things, and that dynamic was one of the things viewers loved about the programme. He is, without doubt, an outspoken, challenging, opinionated, disruptive broadcaster. He has many critics, and he has many fans.

"You all know that I disagreed with him about Meghan's interview. He himself clarified his comments about her mental health on the show yesterday. There are many voices on GMB, and everyone has their say."

"But now Piers has decided to leave the programme," she continued. "Some of you may cheer and others will boo.

"He has been my presenting partner, Monday to Wednesday, for more than five years. And during Brexit and the Pandemic and other issues, he has been a voice for many of you, and a voice that many of you have railed against.

"It is certainly going to be very different. But shows go on, and so on we go."

"Well said," offered Wednesday co-host Ranvir Singh. "That can't have been easy. It's not easy, is it?"

"He's a big character, and lots of people got in touch to say, you know, this was always on the cards," Singh continued. "People are glad that he's gone; many viewers will be absolutely gutted this morning.

"We had our highest ratings on Monday - there's a reason for that. People want to know what he thinks and people like to hear whether they agree with him or not. They want to hear what he has to say. And, you know, we've all been on that ride, haven't we? We've all been on that ride. And, you know, they don't call him 'Marmite' for nothing. There's a reason for that.

'How much do you give and how much is then taken from you.'@ranvir01 and @susannareid100 react to newly released clips from that bombshell Oprah interview, in which Meghan Markle discusses privacy. pic.twitter.com/RWpGj3QcsD

"We are here. The show is still GMB. We still do our job and we've still got lots to say and lots to debate. But, of course, for many of you this morning, you will be scratching your heads a little bit. But, we understand that, and a colleague of ours has left."

"It's a different atmosphere in the studio today," Singh admitted. "It's a slightly discombobulating feeling for all of us.

"It's a strange morning for all of us. But the decision has been made, and I think, you know, when there are thousands of complaints about something, things have to be taken seriously and also, of course, you know, Buckingham Palace [is] taking what Meghan said very seriously."

Writing on Twitter on Wednesday, Morgan said: "On Monday, I said I didn't believe Meghan Markle in her Oprah interview. I’ve had time to reflect on this opinion, and I still don't. If you did, OK. Freedom of speech is a hill I'm happy to die on. Thanks for all the love, and hate. I'm off to spend more time with my opinions."

He accompanied his tweet with a Winston Churchill picture and quote that read: "Some people's idea of free speech is that they are free to say what they like, but if anyone says anything back, that is an outrage."

On Monday, I said I didn't believe Meghan Markle in her Oprah interview. I’ve had time to reflect on this opinion, and I still don’t. If you did, OK. Freedom of speech is a hill I’m happy to die on. Thanks for all the love, and hate. I’m off to spend more time with my opinions. pic.twitter.com/bv6zpz4Roe 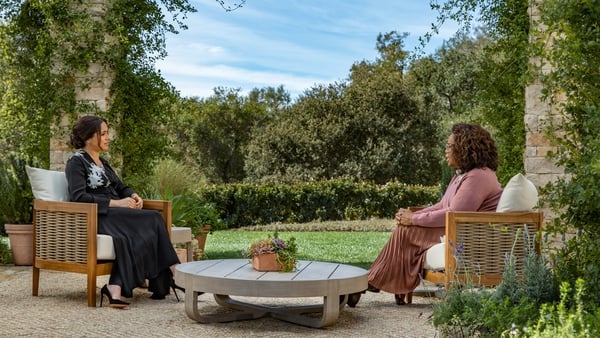