Piers Morgan has quit ITV's Good Morning Britain amid the fallout over comments he made about the interview given by Britain's Duke and Duchess of Sussex to Oprah Winfrey.

"ITV has accepted this decision and has nothing further to add."

UK TV watchdog Ofcom had earlier launched an investigation into the comments.

The organisation received more than 41,000 complaints about remarks Morgan made during Good Morning Britain on Monday.

We have launched an investigation into Monday's episode of Good Morning Britain under our harm and offence rules.

The presenter made dismissive comments about Meghan Markle's claims to have experienced issues with her mental health.

An Ofcom spokesperson said: "We have launched an investigation into Monday's episode of Good Morning Britain under our harm and offence rules."

Responding to Prince Harry and Meghan Markle's interview with Oprah Winfrey, Buckingham Palace issued a statement on behalf of the Queen on Tuesday that read: "The whole family is saddened to learn the full extent of how challenging the last few years have been for Harry and Meghan.

"The issues raised, particularly that of race, are concerning. While some recollections may vary, they are taken very seriously and will be addressed by the family privately.

"Harry, Meghan and Archie will always be much loved family members."

During Tuesday's episode of Good Morning Britain, he stormed off set following a discussion about Meghan Markle with his colleague Alex Beresford.

The weather presenter had defended the couple, who have made global headlines following their bombshell interview.

She added that ITV Managing Director of Media and Entertainment Kevin Lygo had been in discussion with Piers Morgan in recent days regarding his coverage of the couple's interview.

She said Good Morning Britain was a "balanced show", adding: "ITV has many voices and we try and represent many voices every day. It's not about one opinion." 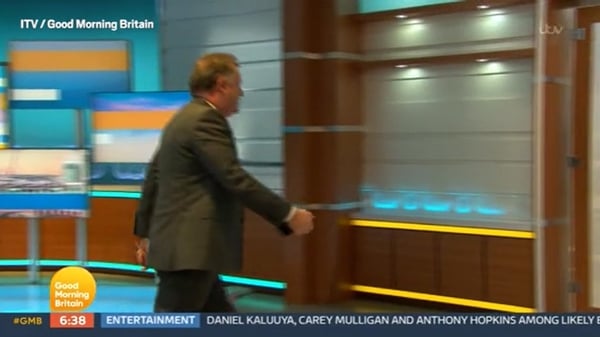