Colin Farrell has told the Virgin Media Dublin International Film Festival that the part he wishes he had played is Dustin Hoffman's Oscar-nominated dual role in the 1982 romantic comedy Tootsie.

Directed by and co-starring Sydney Pollack, Tootsie tells the story of Michael Dorsey (Hoffman), a struggling actor who reinvents himself as Dorothy Michaels in order to get a job on a daytime soap. Major success follows - with bigger dilemmas not far behind.

Speaking at an online public interview with festival director Gráinne Humphreys on Thursday, Farrell described Tootsie as "one of my favourite films".

"Tricky now [to star in], of course, but I think because of exactly how that character is structured and that story is structured, I think maybe, possibly, you'd be able to do it. I don't know.

"I just love that film and that role. Dustin Hoffman is just perfect in it. And everyone in it, again, is [superb] - Sydney Pollack at his best, and Charles Durning and Jessica Lange and Bill Murray. Brilliant cast in a perfect film. That would have been fun."

Farrell was then asked by an audience member to choose "the favourite part that you've played yourself".

"Oh boy, oh man," he replied. "God, I can go to town! Anyone that's still awake, I could have them asleep in 30 seconds with the beginning of what would be a very long-winded answer to this one, because they all just mean different things at different times.

"But, I suppose, the obvious answer, because it's true, is Ondine. That experience was very special... There's a magic little 11-year-old upstairs [son Henry] now who's doing his homeschooling and he's only there by virtue of that film."

"And that character, Syracuse, and that story and working with Neil [Jordan, writer-director] and shooting in one of my favourite parts of the world hands down - if not, to be honest with you, my favourite part of the world - the Beara Peninsula and Castletownbere," he continued. "That's where I did Falling for a Dancer for the BBC; it was my first professional job.

"To go back to Castletownbere 15 years later and do Ondine with Neil was extraordinary. And with Alicja [Bachleda, co-star and Henry's mother]... So, I think that character. Yeah, I'll say that character."

Festival Memories with Colin Farrell is free to view and online at the Virgin Media Dublin International Film Festival until 14 March. To book, click here. 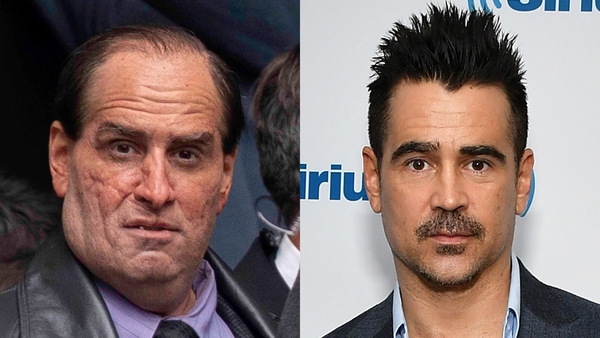 Colin Farrell is unrecognisable on the set of new Batman movie