Amanda Seyfried, a first-time Golden Globe nominee for her role in Mank, watched the show from the American South, where she is with her family.

The US actress wore a dress by Oscar De La Renta – and her five-month-old son wore a tux. 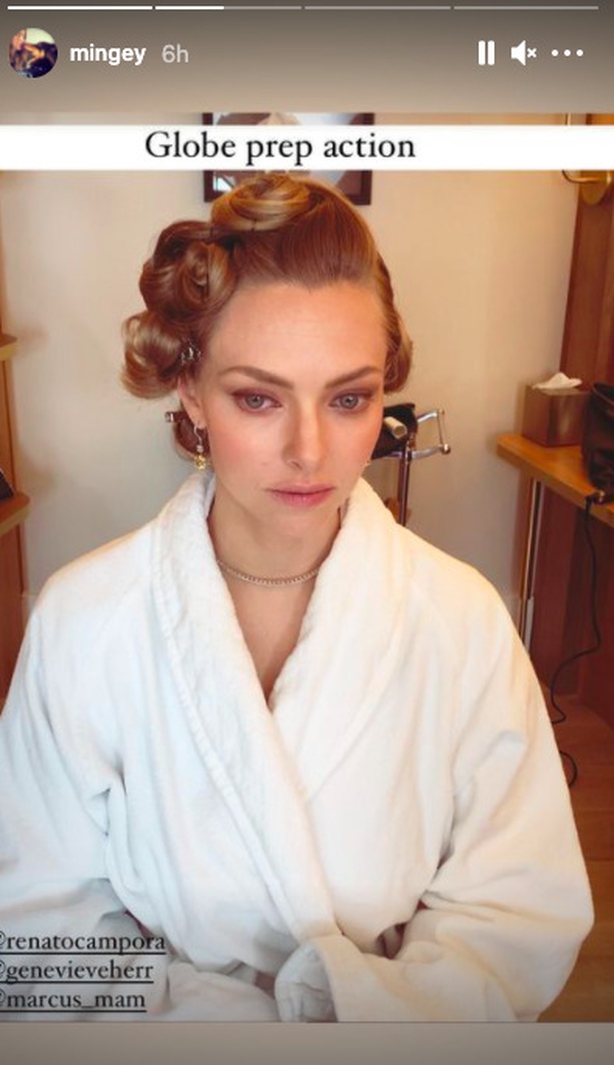 Seyfried plays old Hollywood star Marion Davies in Mank and said the goal was "restoring her legacy", describing it as "really important".

"The responsibility was intense," Seyfried said, adding: "I had an incredible experience."

Welcoming the mostly virtual Globes. Seyfried, 35, said: "This is so great. I am holding my son's hand right now, I would not be able to do that if I was on the red carpet."

Gillian Anderson, who is nominated for a supporting actress Golden Globe, discussed the biggest challenge of playing Margaret Thatcher in The Crown.

The star, who spoke to E! News from a hotel room in Prague, said: "I think in part doing all the bits at the same time. You work for a long time on a voice, for instance, then you piece other bits together like movement and mannerisms and walk.

"And then it's kind of putting those together at the same time, with the words and in front of the camera, is kind of like patting your head and rubbing your stomach."

The Crown's Josh O’Connor revealed he and his co-stars were texting each other while waiting for the Golden Globes’ virtual ceremony to kick-off.

O’Connor, who plays the Prince of Wales, revealed how the cast is kept in touch while tuning in to the ceremony from their respective bases.

He said: "We do have a The Crown group and that is pinging away at the moment. And we all text each other individually."

He said it is "such a shame" the cast could not be together, adding: "We’re with each other in spirit."

Over on Instagram Elle Fanning who is nominated for her role as Catherine The Great in the period TV series The Great, opted for a pale aquamarine gown with embellished shoulders for the glitzy event.

He wrote: "Golden Globes are tonight! All dressed up with nowhere to go, but something to watch! So proud of my @thegreathulu family, honoured to be nominated alongside so many friends and people I love."

Kate Hudson, who is nominated for her performance in Sia's controversial directing effort Music, chose a white knee-length dress with dramatic cuffs.

She wrote: "Just because we're doing the Golden Globes from home doesn't mean I'm not gonna bring the same old fashion vibes to my couch!

Modern Family actress Sarah Hyland is one of a handful of famous faces actually attending the event at the Beverly Hilton hotel in Los Angeles.

She shared photos of herself in a red Monique Lhuillier dress and wrote: "Lady in Red… literally everywhere… for the #goldenglobes."

Meanwhile, other stars shared their own throwback photos in memory of previous ceremonies.