Actor George Clooney has said US President Donald Trump and his family have been dumped "into the dustbin of history" following the mayhem in Washington DC.

The Midnight Sky star said it was "devastating" to watch events in the Capitol, the seat of American democracy, after protesters ransacked US government buildings.

According to The Hollywood Reporter, Clooney told The Business podcast it was the "straw that breaks the camel's back" following four tumultuous years of Mr Trump’s reign.

He said: "This puts Donald Trump, Donald Trump Jr, Ivanka, all of them, into the dustbin of history. That name will now forever be associated with insurrection."

In a new video released since the chaos, President Trump conceded the election to president-elect Joe Biden and said the "new administration will be inaugurated on January 20" and his "focus now turns to ensuring a smooth orderly and seamless transition of power".

Many celebrities have been appalled by the unprecedented scenes in Washington DC, sharing their outrage on social media.

Captain America star Chris Evans said he was "speechless", before suggesting the protesters - the vast majority of whom were white - would have been treated differently by authorities had they been people of colour.

Pop star Pink said she was "ashamed" while Marvel actor Mark Ruffalo described the events as a "coup attempt."

As a United States Citizen, and the daughter of two veterans, and the sister of another, I am ashamed of what is happening in Washington. Hypocrisy, shame,
Embarrassment. Unpatriotic hypocritical sheep drinking poison Kool aid. This a sad day for America.

The outgoing commander-in-chief is facing calls to step down before his term ends on January 20, such is the depth of anger after his supporters stormed the US Capitol Building. 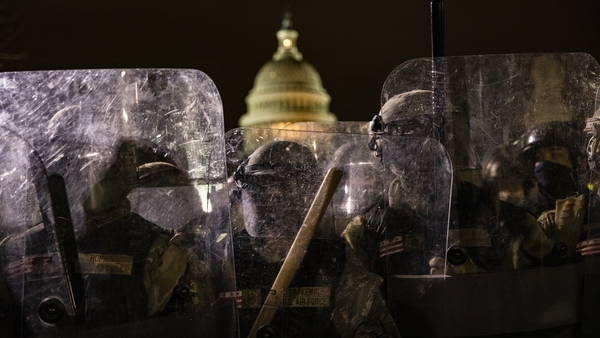