Actress Norma Sheahan has revealed that she had her own macabre brush with death when she was filming Dead Still, the spooky new murder mystery set in Victorian Dublin.

Speaking to RTÉ Entertainment, the Cork actress, who has also starred in Moone Boy and Bridget & Eamon, said, "My mother died last year and during the wake, the floorboards sunk into the ground and the coffin started slowly going down under because of the weight of all the people in the room.

"The crystal was sliding down the cabinet. It was hilarious. Irish humour is so funny and that's like this new show."

It certainly sounds like a scene from Dead Still, the six-part gothic costume drama that mixes drama, mystery and comedy to tell the story of how "post-mortem" photography became a craze in Victorian Dublin in the 1880s.

The new show is part of 18 hours of drama airing across RTÉ’s new season and it sees the always great Michael Smiley in the lead role as Brock Blennerhasset, a renowned memorial photographer who is drawn into a series of apparent murders which appear to be linked to his work. 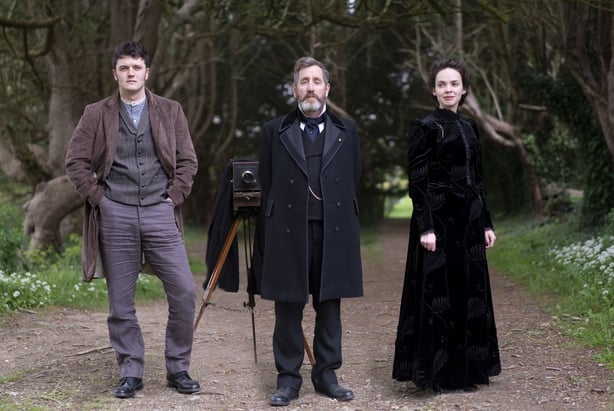 Blennerhasset, a member of the Anglo-Irish landed gentry, leaves his privileged background and moves to Dublin and sets out to establish himself as a "memorial" photographer, who specialised in the rather morbid art of taking pictures of dead loved ones for mourning families.

"People would dress up their beloved dead relatives and have parlour photos taken of them and Brock was the top man for the job," Smiley told RTÉ Entertainment.

"I've always felt the Irish had a different attitude to death than the English. We had wakes with the body lying in the front room for days and we celebrate that person’s life and this show is an extension of that."

"We catch up with him just as his photography is becoming popular and not only is he known as the man who is the best at his job but also that’s there’s a younger generation coming through. He’s a very private man as well, there’s a lot going on his life."

The new drama could be broadly described as a thriller meets murder mystery, with a macabre undertow of comedy. "There’s horror, it’s gothic . . .  there’s a lot of elements to it which makes if interesting." Smiley says.

"Everybody loves a costume drama. Look at Downton Abbey, so to have a costume drama set in Ireland with authentic Irish voices and an Irish production and an Irish studio behind it is really refreshing. It’s not trying to be English. It’s very Irish in its ways."

"Everyone is weird in it," she says. "It’s 1880s and I can’t believe that everyone lined up to have their photo taken with a dead body. We’re in a haunted house and we’re a slightly weird family.

"I won’t give too much away but Michael’s character comes in and as straight and all as he tries to be, Michael is hilarious.

"There’s always this comic undertone but overall, it is mystery murder, it’s dark and gripping and myself and Mark O’Halloran play a couple and Brock Blennerhasset stays with us and it’s just a really lovely freaky episode. It’s hard to explain what this show is but it’s mesmerising. I was really gripped by it."

Asked if the eerie new drama is gory, Smiley said, "It’s not a slasher movie. It’s not Freddie Krueger does Victorian Dublin. You’re going see dead bodies, that’s what my character does."

"The fact that it’s true and it’s not makey-uppy, I just love that," added Sheahan. "This all happened in the 1880s. The look of it as well, it looks so authentically 1880s. The producers are deadpan, so they do comedy in their sleep so there’s always that underlying comedy."

"I think what’s also interesting is that sensibilities of how we see death now," says Smiley. "How touchy we are about it. I’ve always felt the Irish had a different attitude to death than the English. We had wakes with the body lying in the front room for days and we celebrate that person’s life and this show is an extension of that.

"People weren’t as squeamish about that back then."

The show, which also stars Kerr Logan, Conall Molloy, and Eileen O'Higgins, is also unsparing in its depiction of the grinding poverty of Victorian Dublin, according to Smiley. "Death is all around you and death was so much closer in those days," he says.

"I think with the poverty you see in the Monto and all that stuff, the difference between the haves and have-nots was very striking, especially between the old Ireland under British rule.

"Post-Famine, people came into Dublin hoping to get a better life and invariably got a worse life and the show touches on that too. This is a very Irish drama."

As with everyone else, Smiley’s career has been impacted by the pandemic. He had just completed filming Bloodlands, which was shot in Northern Ireland, when lockdown was imposed. Since then, he’s had a couple of offers and he’s also writing a film. "Plus, I’m married with four kids, so life is a smorgasbord." he says.

Mother of two Sheahan had to cancel her comedy tour, the charmingly titled Heal Your Hole with Norma Sheahan, and is currently working on rescheduling dates for a smaller audience. She also started a podcast, which she records in her car.