Singer Sandy Kelly shared the plight of caring for someone with special needs during the Covid-19 emergency in a heart-rending interview on Claire Byrne Live on RTÉ One on Monday night, telling the presenter: "There were days when I thought I really couldn't cope another day."

Kelly is caring full-time for her adult daughter Barbara since the Covid-19 emergency began. She contacted Claire Byrne Live from her home in Strandhill, Co Sligo to highlight how difficult the last three months have been for the family.

"Obviously, being a parent of a child with special needs - as all the other parents listening out there will know - it's a fairly restricted lifestyle, anyway," she began. "You know, you live a different life.

"But then when the Covid-19 pandemic happened and we all went into lockdown, I didn't lose the respite hours for Barbara. In fact, they've been fantastic. But I made a decision myself to bring her home. So as soon as we went on lockdown I collected Barbara and brought her home. And so she's been with me ever since. And that has been very challenging."

"My niece Sandie lives with me since my sister passed away. So we girls are in the house and Barbara, she's got a very complex personality. She hasn't really been diagnosed with anything specific. She was born with a cyst on her brain. As a result of that, she's autistic, she's epileptic, paranoia. She suffers from a lot of different things, so it's very complex."

Sandy Kelly explained that Barbara "likes to control everything".

"So when she's home all of the time and doesn't go to respite, that means that she's trying desperately to control everything within her family and within the house. For instance, we can't have people... We weren't having people to the house, anyway, but I laughed when I heard the news today that you could have six people over. I was thinking, 'That's not going to happen in our house...'

"She doesn't like anybody coming to the house, including family, her own brother. She doesn't mind so much my grandson, who's five-years-old; she's looking forward to him coming. But you can't sit in a particular chair. If we are out we have have to stay very isolated. I live in Strandhill, which is a beautiful area, and the people there are wonderful. And we do have some beaches that I can walk the dogs and bring Barbara with me where we won't meet anybody, because the first thing she wants to do is hug somebody. Then if I tell her she can't do that immediately she will get aggressive."

Sandy Kelly said the "worst thing" is to see how unhappy Barbara is "all of the time".

"It's hard for us, and it's been really challenging in the house. I mean, there were days when I thought I really couldn't cope another day. And then you get to the next day. But watching her, it's a double-edged sword. My heart is broken for her as well. And of course, Claire, I'm aware that there are so many people out there like me, suffering. And I suppose I felt a little bit during the pandemic... I don't know how everybody else felt - I felt we were a little bit forgotten."

Of the physical and mental toll, she said: "I used to have Barbara at home all of the time until she was 18, she's 38 now. And she travelled with me on the road. But I was a lot younger then. I turned 66 in February. I'm just not able anymore. It's great when she goes to respite."

She stressed that she wanted "to say 'thank you' to all of the carers out there who take on the job of minding our children".

"We really appreciate it, and I suppose I appreciate it more now because I'm looking after Barbara all of the time."

"I brought her home so that I could mind her myself because, you know, her physical wellbeing is very important as well. She has a shunt in her head since she was a baby. If she got a high temperature or any sort of a bad virus or anything, straight away that would be a huge life-or-death situation for her.

"Also, I was very mindful of how difficult she is. As much as I love her, and she is wonderful, she can be very physically and verbally aggressive a lot of the time. I didn't want that to be in the house with her other friends in the respite home, and making their lives even more difficult. I thought it was better for us to try and cope at home.

"Now I'm wondering how much longer I can cope and also, hearing one of your first guests talking about a new surge in the pandemic, immediately I was thinking, 'Well what would I do?' I'm not trained as a carer. I'm a parent."

"You said when you wrote to me this has turned out to be one of the most difficult periods in your life," said Claire Byrne.

"I've had some challenges in my life, as has everybody," Sandy Kelly replied. "Losing my sister to suicide two years ago was horrible, as you can imagine. But having Barbara at home 24/7, and she won't go anywhere with anyone except me... I have to be with her; she sleeps with me, she eats with me and all of these behaviours - you can't look at her, you can't sit there. You'll try to avoid the argument or the disagreement, but you can't avoid it.

"It's a mental strain, constantly, on both her and myself, and young Sandie who's also in the house. Sandie has found it very hard and my heart goes out to her because she's had a difficult enough time anyway. [Pausing to drink water] I'm sorry, I'm a wee bit emotional."

Sandy Kelly said she felt guilty about leaving the house to go to the RTÉ studio in Sligo to talk about her situation.

"Barbara is a wonderful girl in so many ways, and I feel bad having to have this conversation about her," she admitted. "But I feel that it's important to create an awareness for other parents out there that are struggling. There are so many people, Claire.

"I'm fortunate because Barbara can walk, she can talk, she curses like a sailor, I don't have to feed her, she can do all these things. It's just the abuse that's very hard, mentally. I can't retaliate. I can't say something back to her - nor would I. But the abuse we get all the time from her upsets her, so it's an impossible situation. Still, as a mother, and you're a mother - you've three wonderful children - you do feel guilty. I feel guilty about every aspect of Barbara."

When asked what would help her and other parents, Kelly replied: "Well, I think when Barbara was born there really was no help support there. You couldn't Google anything, there was no carers or anything like that. So we're in a much better situation than we were 38 years ago.

"But you ask me what do I need? Claire, I don't know. Because it's difficult. For me to come here tonight and explain to Barbara why I was leaving the house was difficult.

"To be honest at the moment, I don't know what there is out there for me that can help me or help others in my situation who have adult children who are physically bigger than themselves, that they can't sort of 'put manners on' in the normal way. You're not going to challenge my daughter Barbara. Nobody would. And there's a lot of people in that situation. To be honest with you, I really don't know what to do about it. I don't." 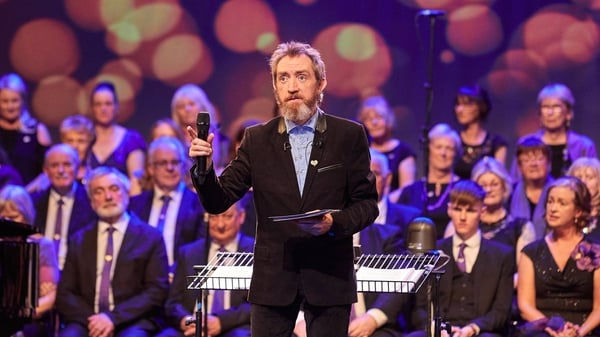