Derry Girls star Saoirse-Monica Jackson has said she spent "a year eating biscuits" as a disastrous door-to-door salesperson in Manchester before she was cast in the hit show.

Jackson was Kevin McGahern's first subject in his new series Kevin Paints on the RTÉ Player, telling the painter and host about her employment history while she posed for her portrait.

She described herself as "absolutely awful" at sales.

"I was living with my ex-boyfriend in Manchester, and I was lying to him and telling him that I had a sales job in town," she recounted. "He was dropping me into town every day to this office block, and then I would run 'round the corner and get into this car and drive outside of Manchester and sell Hello Fresh [meal kit delivery service] door- to-door."

"It was only commission-based, so you only got paid on your commissions," she continued. "Anybody that actually was interested in inviting you into their house to sign up for this was [sic] normally really old people that I just didn't believe knew how to work the Internet well enough to ever get out of it!

"I would get in the door [and] they would basically just feed me biscuits, cup of tea. I would have a chat with them and then they would try and sign up to it, and I would tell them not to and then I would leave! So I basically was just strolling 'round the outskirts of Manchester for a year eating biscuits with old people before I got the phone call!"

"So I actually got sacked from that job then," laughed Jackson. "Yep, that was understandable. I was in Manchester at the time and I walked up to a Greggs [bakery] and I was so scared to ring home and tell them I got fired from another job and I just didn't know what I was going to do.

"And the next thing this email came through saying 'Derry Girls' from my agent at the time. I opened it and genuinely thought they were making a documentary about Derry! And I thought, 'Alright, ok, this isn't really the path that I want to go down but, I mean, you know, it's something. And then I read it and it was this obviously incredible sitcom and I was so thrilled and I just thought at that moment in time, 'I really, really have to, have to get this'.

"I was on the phone and I rang my mam and told her about it and in walks [sic] these two men from Belfast. They heard me overtalking [sic] to my mum on the phone and they came up and they were like, 'Where're you from?' I was like, 'Derry'. They were like, 'Are you looking for a job?' I was like, 'Funny you mention that - I just got fired!' And then they took me down to these mobile cabins and then I was working on a building site then for about six months.

"They just walked me down and put me straight into office manager of this building site, so I was up doing snagging and stuff on the building site every day. I loved it! It was great craic! And then I went on to Derry Girls."

Watch the show on the RTÉ Player now or on RTÉ2 on Thursday at 9:20pm. 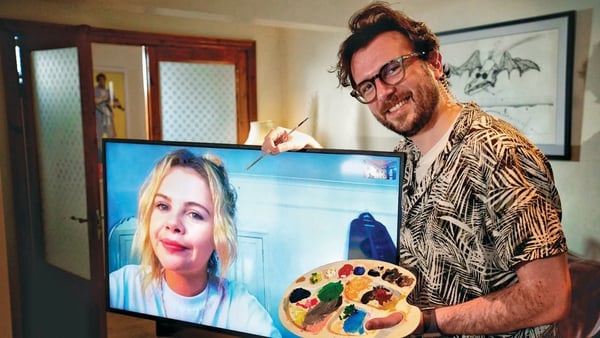 Easel does it. Kevin McGahern back with new show on RTÉ Player