U2 frontman Bono has revealed that he intends to celebrate his 60th birthday this Sunday during the Covid-19 restrictions with a long walk.

Speaking to The Ryan Tubridy Show on RTÉ Radio 1, he said: "I was going to have a quiet birthday anyway..just go for a long walk, that was the plan, a bit of a pilgrimage with the family.

"There are people giving up a lot more than their birthdays, think of people cancelling their weddings, funerals, think about that. I am grateful to just have got here, I am really grateful to the people who got me to where I am, to the band, my mates and the country who gave U2 a great life who allowed us to be useful in this time."

"I'd like to thank the country for putting up with my sometimes avuncular self. I'm feeling pretty meditative and thankful with life."

When asked how he has been spending his time during the current restrictions, Bono said: "I should say, I am not doing enough hoovering at home, I am quite good at hoovering, I thought. Beds are not made well enough, I have been told.

Bono also mentioned Italian opera star Andrea Bocelli, Johnny Cash, Elvis and Billie Eilish as among the artists he is listening to.

"Lockdown has worked out great for us, we still like each other and want to be in each others company, the younger ones want to be out and meet their mates more."

He added, "Our boy, John, is doing the Leaving Cert, and to have some certainty is a great thing, I think that will be announced this morning, I heard him screaming out the window last night, I think he thinks it’s done. But we will find out this morning.

"I have a son here in the house with the band [Inhaler] rearing to go, they booked a show and sold out two nights in Troubadour in LA, they are flying. The only thing annoying me is Elijah keeps telling the press that his dad is Noel Gallagher."

In the interview, Bono, also mentioned his other children, saying, "Eve is a great actor, Jo [Jordan] is an amazing activist, John, doing the Leaving Cert, little John is six foot, I want to be around and see Ali more."

When asked by host Ryan Tubridy about certain residents in his neighbourhood of Dalkey, he said: "Hozier, he lives down the road, he has the raging soul but the politeness to keep the rage down.

However, Bono also has a very famous temporary new neighbour in the shape of Matt Damon, who was caught in the quarantine and is currently living in Eddie Irvine’s house.

"Most people have been dodging him since Contagion. He's like Johnny no-mates, I've known him a long time. he's an incredible human being. His family are close by."

"I'll tell you one thing that annoys me about him," Bono added. "All of the locals here have voted him 'sexiest man in Dalkey' which I find offensive. What is this all about? He has been posing with a Supervalu plastic bag, he carries stuff around in it, he used to do his shopping before the lockdown. By remaining here he is showing confidence in the country, he could have left, he loves it here, he is a proper person."

U2 has been very active in helping with the Irish fight against Covid-19, contributing €10 million to secure personal protective equipment, while Bono reached out to the leader of South Korea, seeking sources for diagnostic kits and PPE equipment.

Bono’s bandmate Adam Clayton is due to appear on Friday night’s episode of The Late Late Show. 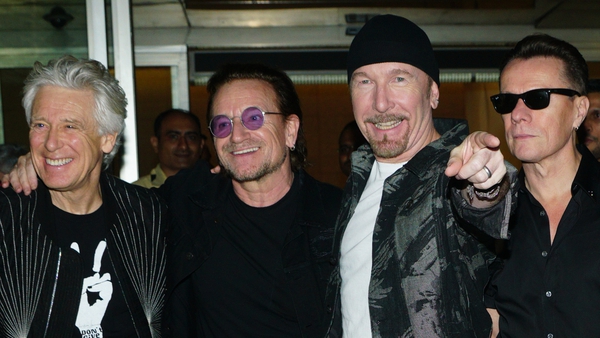