An eagle-eyed pedestrian spotted James Corden filming a recent edition of Carpool Karaoke with Justin Bieber and has revealed the car was actually getting a lift on a camera rig.

Saw James corden and Justin Bieber filming carpool karaoke and this is why I have trust issues — he isn't even driving! pic.twitter.com/bkP9moGJmu

However, after the video went viral, executive producer of the Late Late Show with James Corden, Ben Winston, was quick to clarify that Corden does drive, unless it is unsafe for him to do so.

Not true! We only use a rig when we are doing a "stunt" as part of the Carpool - when it would be impossible for James to drive! This has occurred only maybe 4 times in 50 or so carpools... Safety is key! https://t.co/kfJXqZqEHq

He wrote on Twitter: "We only use a rig when we are doing a 'stunt' as part of the Carpool – when it would be impossible for James to drive!

Fans of the show were quick to make fun of the viral video on Twitter:

the fact that james corden doesn't actually drive during carpool karaoke must be the biggest lie since we found out that zac efron didn’t sing when he played troy bolton pic.twitter.com/NedLpSAu6I

Are people tick? 😂 Stevie Wonder once drove the car during James Cordens Carpool Karaoke. What's the big surprise that it’s being pulled pic.twitter.com/6glCHrw8Tq

I don't care if carpool karaoke is real or fake, I just want Taylor Swift on it

Then the US Late Late Show with James Corden also poked fun at itself with a follow-up tweet:

guys, we don't even use a real car pic.twitter.com/O0sxMwNFtP

Corden's version of Carpool Karaoke originated on his US TV chat show, but its popularity has expanded beyond the reach of the show's audience and celebrities have even started asking Corden if they can join him for a singing session in the car.

As a result AppleTV have turned it into its very own programme. 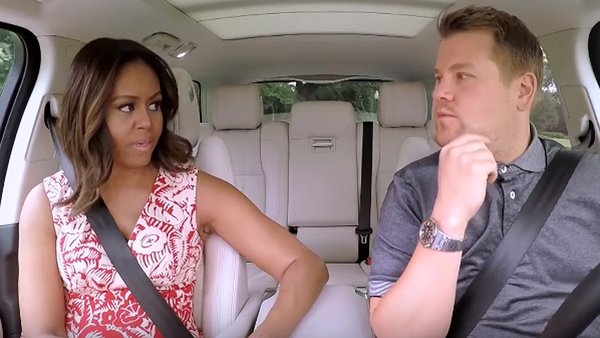 Michelle Obama next up for Carpool Karaoke Entertainment