The 40-year-old stepped down as host of the upcoming winter season of the ITV dating show after she was arrested following a domestic incident earlier this month.

She was charged with assaulting former professional tennis player and model Burton (27) by beating at her flat in Islington, north London, on December 12.

Flack was mobbed by photographers as she arrived at Highbury Corner Magistrates' Court on Monday morning wearing a black coat, scarf and boots before being escorted into the building by police.

She stood in front of the glass-enclosed dock to confirm her name, address, date of birth and that her nationality is British before the single charge was read out in court.

Her lawyer Paul Morris interrupted proceedings to tell District Judge Julia Newton that Burton does not support the prosecution.

When the charge was put to Flack for a second time, she answered: "Not guilty."

Prosecutor Katie Weiss said: "He is a victim, he sustained a significant injury to his head."

Burton arrived at court separately from his girlfriend wearing a navy parka jacket with a fur-lined hood and watched proceedings from the packed public gallery.

He has previously spoken out in support of the presenter, claiming she has become the subject of a "witch hunt" following her arrest.

Flack and Burton unfollowed each other on Instagram ahead of the hearing.

Taking to her Instagram story shortly after her court appearance, Flack wrote that she will feel "relief" when she is able to giver her account of what happened.

"Thank you for your continued support and love…"

"It's going to be a relief when I am able to give my side of the story, when I’m allowed to x" 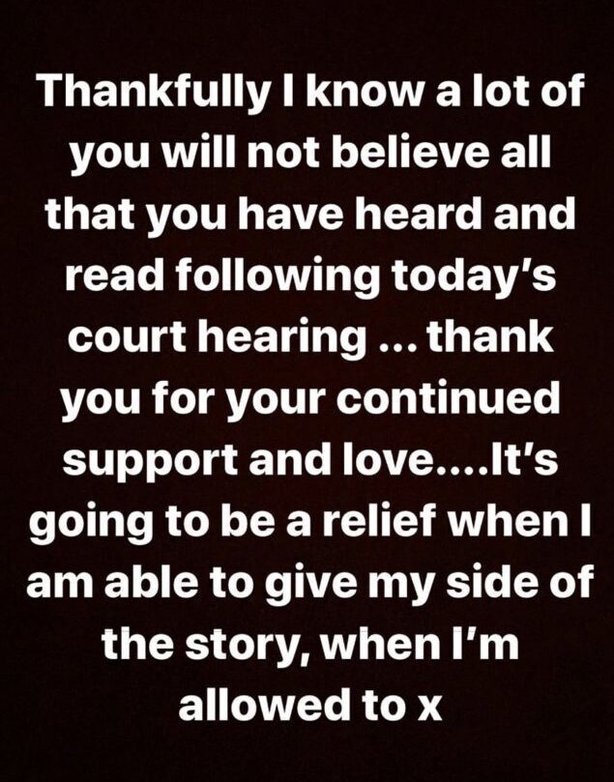 In an emotional post to the social networking site on Sunday evening, Flack wrote: "This is the worst time of my life.