Ryan Tubridy has said the response to Friday's Late Late Toy Show has been "as overwhelming as it has been humbling" after viewers took time to pass on their praise and admiration for the young stars of the show.

From amazing performances, to heart-tugging surprises, and brave messages to bullies, it was a night that will live long in people's memories, and is now available to watch on the RTÉ Player.

A "completely banjaxed" Tubridy took time to reflect on the Toy Show when he returned to RTÉ Radio 1 on Monday morning, and how the message that "kindness is king" had resonated with people.

"Thank you to everyone who sent WhatsApp messages, Instagram messages," he said. "The guys are telling me the email has never been so busy over the weekend - and that's before I even get to the TV office.

"So obviously something lovely happened, and for that reason I just wanted to thank the people behind the scenes who put it together. They just worked so hard, and they're colleagues; but more importantly, they're friends. And that matters because it's just meant there was a warmth to it and a magic to it and an effort put into it that it just 'lifts the sleigh'."

"And then, obviously, the biggest thanks have to go to the children, who kind of knocked us out, really," he continued.

"I mean, there's only so much you can plan, going into a show like that because they're children. They're not professional broadcasters or they're not people flogging a book or telling you about their next movie or something - they're just children with little stories.

"And each time we got to one child or another, they just seemed to come out with this wisdom and knowledge, self-awareness and kindness that seemed to make a lot of people cry."

"I found myself uncharacteristically having to take very deep breaths every so often because honestly, if I was to let go I probably wouldn't have made it through part two or three," he admitted. "Like everyone else, I was very taken aback by them."

"All the stories touched different people and resonated with different families for different reasons, and without being preachy or sanctimonious - we didn't want to do that," the host explained.

"They simply were just little snapshots of life for children in Ireland in 2019. But the inner child - if not to be too grandiose about it - of a lot of people came out too going, 'That was me', or I also found a lot of younger children would turn 'round to their parents and go, 'What do you find strange about this?' The next generation just seem to be very smart and good to go."

"Every bone in my body is groaning," he concluded. "But it was worth every second of it. It would take it out of you, that's the truth, in a good way.

"We'll do it all again next year - I have the theme in my head already!"

Watch the Late Late Toy Show on the RTÉ Player. 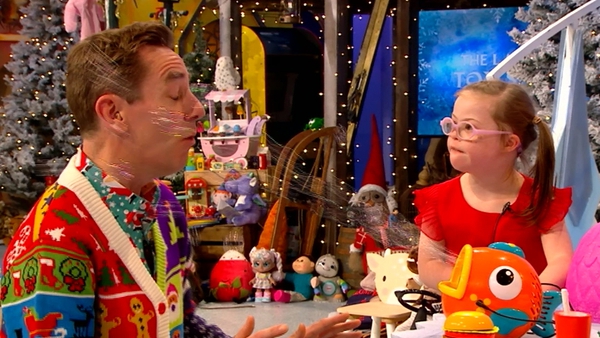