Oh what a night! The youngsters, as always, stole the show on The Late Late Toy Show. Here are some of our favourite bits.

Wild About Harry
Harry Hennessy, aged six, from Dublin had the daunting job of being the first toy tester of the night. But not a bother on him! He also proved to have the best laugh of the night - a do-that-again delight. This is what we call acing an audition to be on every year!

Ella Enchanted
Five-year-old golfer of the future Ella Kenny from Kildare met her hero, Shane Lowry, who presented her with a signed flag from The Open and said he would bring Ella to The Irish Open next year. Ella was lost for words; we had something in our eye.

MC Tiny bigs up Cork
It wouldn't be the Toy Show without some southern shenanigans. Sure enough, Cork's MC Tiny did the county proud with his cover of Old Town Road. Dancing with the Stars is back on RTÉ One in January - get him and his posse booked now!

Molly and Oisín bring the magic
Molly Argaud, aged five and "the boss", and her eight-year-old brother Oisín showcased their tricks to the Mission: Impossible theme. They also conjured up the comeback of the night. "How long have you been in the magic business?" asked Ryan. "Since the summer holidays," replied Oisín. Mic drop!

Fynn sees the funny side of flying faux pas
Junior boffin Fynn Loughnane was demonstrating his science skills to Ryan when shenanigans with snow resulted in some getting in his eyes. But in a recovery that would be the envy of many a television presenter, the eight-year-old was back out for more banter within seconds. What a pro!

Lee's best Christmas present ever
Ten-year-old Lee Cooling was on showing off a bike when Ryan said he wanted a word with him. They had a bit of a chat, with Lee telling Ryan that his big sister Alex was in Australia. Except she wasn't. She was right behind Lee, just like the rest of the teary country.

Ella boxing clever
Proving that you should meet your heroes, 11-year-old Ella Thompson from Meath was surprised by Katie Taylor, with the World Lightweight Champion putting on the pads so Ella could show that she too packs a real punch. Katie predicted she was training with a future champion. She should know!

Nanny Pat's Cameo
Leitrim eight-year-old Tom Cullen loves his Nanny Pat. He loves her dinners, her knitting and, of course, the chats. He loves her so much he even has a personalised jigsaw of her! So what better a Toy Show treat than to bring Nanny Pat on to the show as surprise guest? We all wanted a hug from her too!

Sophia's Supreme Show of Strength
Wow. Dublin youngster Sophia Maher gave the Toy Show its most important moment with an anti-bullying message that spoke to, and for, a better Ireland. "Don't let the bullies stop the things... from doing the things you want to do," said Sophia. "And life would just suck if everybody was the same." There wasn't a dry eye in the studio, or at home. 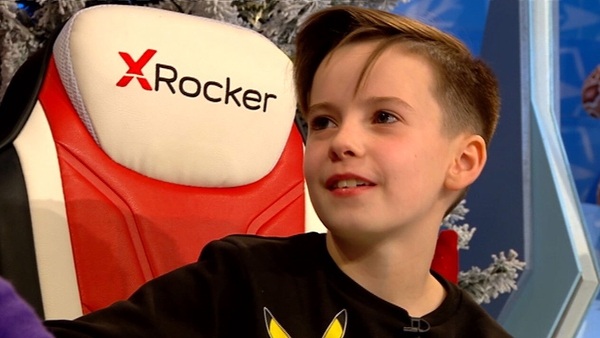