Rose of Tralee host Dáithí Ó Sé bowed to the pressure and donned the boots from Kinky Boots The Musical in The Dome in Tralee on Tuesday night, after 2FM Breakfast's Doireann Garrihy and Eoghan McDermott had helped to raise over €32,000 with their charity challenge.

The two radio presenters had booted it to Tralee at the last minute to make Dáithí follow through on their dare.

Before the 2019 Rose Sinéad Flanagan was crowned, Dáithí told the audience: "Now, you know, when I got into television I'd notions of myself as a serious presenter presenting serious programmes - current affairs, documentaries and all that type of stuff. I never thought I'd be subjected to the humiliation of wearing these in The Dome!"

He then showed off his new look to the delight of the audience.

"The only good thing about it is, right? Mr Eoghan McDermott has to hand over €1,000 to a fantastic charity called Walk in My Shoes!"

The campaign to bring the Kinky Boots to the Rose of Tralee launched after Dáithí commented on a photo of Eoghan wearing the red thigh-high boots, saying he wanted a pair for his hosting duties in Tralee. Eoghan and Doireann then called him out on his joke, daring him to make it a reality.

Eoghan replied to his comment, saying: "Dáithí, if you strut across the stage in a pair of these, I will personally donate €1,000 to a charity of your choice and I'm sure the listeners will match it!"

A GoFundMe page, Dáithí Ó Sé Sexy Boots Appeal, was then started to raise money for Walk in My Shoes, a charity which supports positive mental health and wellbeing in schools and communities around Ireland. With over €27,000 already donated, the pressure was on for Dáithí on Tuesday night - and the boots were already in Tralee, so there was nothing standing in his way!

Doireann and Eoghan tweeted a video of themselves dancing in the back of the car while en route to The Dome in Tralee late on Tuesday afternoon.

They wrote: "We couldn't sit at home and just SEE WHAT HAPPENS. We're en route to The Dome!!!!! Dáithí, we’ve got 22,000 reasons why you should GET YOUR SEXY BOOTS ON FOR @walkinmyshoes!!"

We couldn't sit at home and just SEE WHAT HAPPENS. We’re en route to The Dome!!!!! Dáithí, we’ve got 22,000 reasons why you should GET YOUR SEXY BOOTS ON FOR @walkinmyshoes!! 💵🙌🏻♥️@eoghanmcdermo @RTE2fm

Speaking to RTÉ Entertainment, Eoghan said: "It started out as a tongue-in-cheek Instagram comment and snowballed into a fundraising drive that had 1,600 donors from across Ireland, raising over [at the time of speaking] €22,000."

Doireann added: "How could we stay in Dublin and just hope that it happens?!

"We had to head for The Dome with the boots in tow and see it through. We can't thank each and every one of the donors enough."

Dáithí also had ample encouragement from commentators on Twitter, including:

On Monday night's Rose of Tralee, the subject of the boots arose, but Dáithí remained coy, saying: "It's my tenth year as host of the International Rose of Tralee but I can't do that, can I? I do have the legs for it though…"

You can donate to the GoFundMe page here 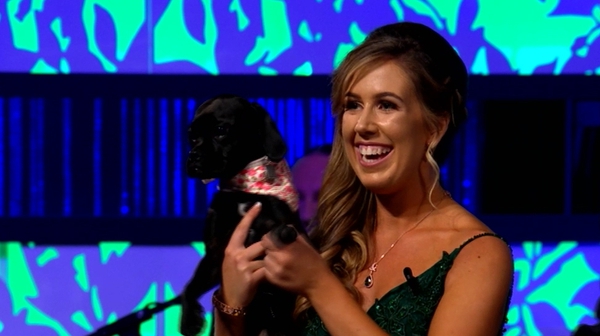 Rose of Tralee - the best moments from night one