Jamie Foxx has denied that he is in a romantic relationship with singer Sela Vave following his reported split with fellow actor Katie Holmes.

Fifty-one-year-old Foxx said in an Instagram Live video that his relationship with 21-year-old Vave is a professional one, describing claims to the contrary as "scandal chasing".

Rumours began that Foxx and Vave were a couple after they were seen leaving a Los Angeles nightclub hand-in-hand at the weekend.

The Press Association reports that in his video Foxx said he is acting as a mentor to Vave. He explained that he had performed a similar role in helping singer-songwriter Ed Sheeran and presenter Nick Cannon on their way to the top.

"When I met Ed Sheeran, I didn't know him from Adam. He slept on my couch for six weeks - he ended up going on to do great things," said Foxx, who has a recording studio in his home.

"It's a double standard when it comes to women," he continued.

"When it was the guys, everything is cool, but when it was the women they try to make it something else. But we are going to try to protect our own.

"And like I said, I spoke to that girl's mom and she put her trust in me."

Vave posted a photo of herself and Foxx on Instagram last month and wrote: "I am so grateful to this man! Thank you so much @iamjamiefoxx for everything you do and for believing in me. #feelingblessed."

Foxx and Holmes were reportedly in a six-year relationship but never confirmed during that time that they were a couple. 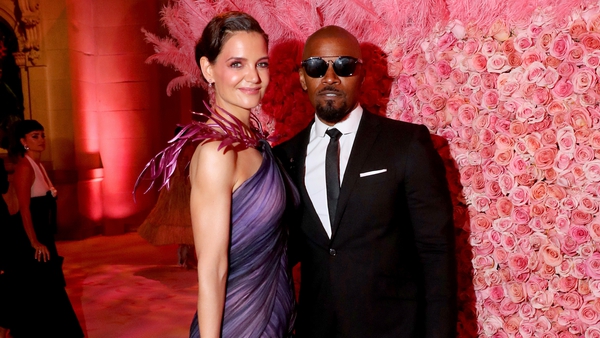 Katie Holmes and Jamie Foxx's romance is over