Belle and Anton have become Sunday's casualties from Love Island, on the eve of the finale, the Airdrie gym owner Anton Danyluk and Bromley make up artist Belle Hassan admitted they have had their ups and downs but plan to continue their relationship.

Belle said the "future looks good" for their relationship despite her being London-based and him living in Scotland.

Speaking after they left the villa Belle said: "I would like to say it holds something, we've got something good. We get on so well. We'll take things day by day and see how it goes, but the future looks good. We've been genuine, real and (true) to ourselves."

She continued: "We haven't faked anything. We haven't allowed ourselves to get wrapped up in it all, we're realistic about things.

"It's cemented a solid foundation and we can hopefully get through the challenges of missing each other. The future looks good." She added.

Anton was not very lucky in love before the arrival of Belle saying he was "definitely humbled" by being repeatedly rejected by the female contestants made him think that he would never find a partner.

"My time in the villa has been mixed emotions. From the first few weeks when I thought I would never find someone. It's definitely humbled me, the whole experience, getting pied a few times! He said.

Anton added: "I have built a family within the villa and got on with everyone so well. When Belle came in she changed my Friend Island experience into a Love Island experience. We clicked the minute we met, instantly attracted. Definitely a romantic and sexual attraction, and we're good friends too."

"We've had our ups and downs but we've come out of the other side strong and I can't wait to see where it goes on the outside."

Anton and Belle had some memorable moments together as a couple:

Anton's coupled up, met Craig David AND milked a goat. What a time to be alive, huh? 🐐 #LoveIsland pic.twitter.com/DwU4idgbiE

When Anton is spied on

I must be the only person who doesn't buy Anton and Belle’s relationship? 🤔 If he didnt couple up with her he’d have gone home, he was quick to end it after one fall out and his pals reckon she’s not his type? Hmmm #LoveIsland

right, I'm genuinely curious. who's actually voting for Anton and Belle like what? #LoveIsland pic.twitter.com/y7NLb8zT6N

Is it me or did Anton and Belle's date look so staged and awkward??  #LoveIsland

While others weighed up the stats and got behind the pair

Anton and belle shouldn't even be in the bottom three. They only received 1 vote where as the other two couples received 2 votes ... sounds abit dodgey to me. Bet Anton and belle go home

In conclusion, Amber and Gregg or Anton and Belle should win because they're the only couples where both parties are liked😁 #loveisland

As much as I love Maura, Curtis is fake I'd love Anton and belle or amber and Greg to win #LoveIsland

The pair are hoping that beauty therapist Amber Gill and Limerick rugby player Greg O'Shea will win the £50,000 prize.

Anton said it would make "an amazing love story" while Belle said Greg was "man enough" to deal with Amber, who became a fan favourite for her no nonsense attitude.

Love Island final is on Virgin Media 2 Monday at 9pm. 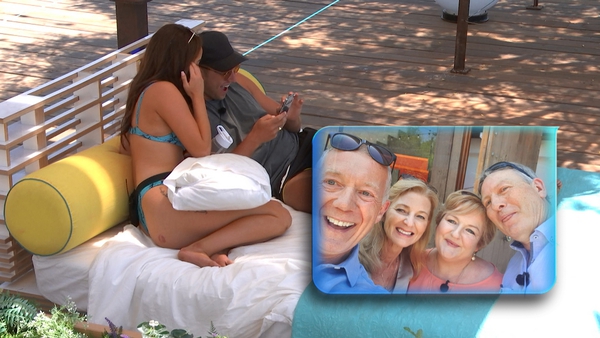