Two of Madonna's dancers have courted controversy at the Eurovision Song Contest by wearing Palestinian and Israeli flags on their backs during a rendition of her 1989 Like A Prayer song.

Organisers have said that it was not an approved part of her act and that they have made Madonna aware that the song contest is a non-political one.

Eagle-eyed viewers lit up social media when they saw that two dancers had Palestinian and Israeli flags sewn onto the back of their boiler suits.

MADONNA makes her statement on Israel and Palestine! ❤ pic.twitter.com/gX0uJj06zE

Eurovision said: "In the live broadcast of the Eurovision Song Contest Grand Final, two of Madonna's dancers briefly displayed the Israeli and Palestinian flags on the back of their outfits.

"This element of the performance was not part of the rehearsals which had been cleared with the EBU and the Host Broadcaster, KAN.

"The Eurovision Song Contest is a non-political event and Madonna had been made aware of this."

The singer had defied calls from pro-Palestinian activists to cancel the show in Tel Aviv, saying beforehand she wanted to create "a new path toward peace".

The Jump singer told the contestants: "You're all winners, no matter what happens. The reason I mean that is because to get here, where you are right now, is not easy. Right?", she said.

"First you had a dream and then you had to believe in that dream, and you had to make many sacrifices. That makes you a winner no matter what.

"Another really obvious statement is, look at all the delegates behind us, everyone here is from all over the world. So many countries that I have been privileged not just to visit but to experience.

"So let's not underestimate the power of music to bring people together. That's the most important thing. Music makes the people come together."

During the live final, the band members held up Palestinian flags while their public vote was being announced.

In a statement, Eurovision said the "consequences of this action" will be discussed by the contest's executive board.

A statement said: "In the live broadcast of the Eurovision Song Contest Grand Final, Hatari, the Icelandic act, briefly displayed small Palestinian banners whilst sat in the Green Room.

"The Eurovision Song Contest is a non-political event and this directly contradicts the Contest rules. The banners were quickly removed and the consequences of this action will be discussed by the Reference Group (the Contest's executive board) after the Contest."

The Netherlands reigned victorious at this year's Eurovision Song Contest, with 25-year-old Duncan Laurence securing 492 points for the song Arcade. 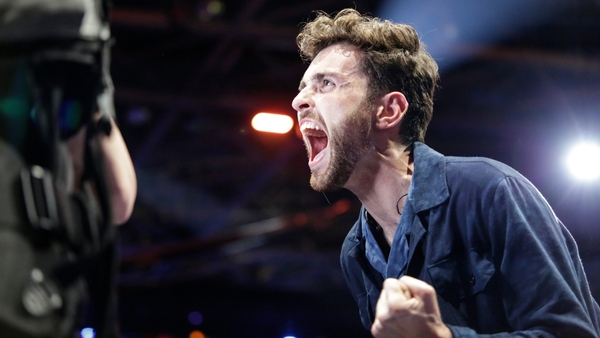