Anne Hathaway has told RTÉ Entertainment how she threw her "first party ever" in Ireland and says she "had a good time" on the Emerald Isle.

The 36-year-old Oscar-winning actress, who can next be seen alongside Rebel Wilson in new comedy The Hustle, filmed Ella Enchanted (2004) and Becoming Jane (2007) in Ireland over a decade ago, but Hathaway says "it just seems like five minutes ago".

"It doesn't seem that long ago. It just seems like five minutes ago," she said.

"I have so many [memories] because I made Ella Enchanted there and I also made Becoming Jane there up in Trim.

"It was kind of the first time I'd been away from home for that long. I was there with my best friend and one day we'd be at a studio and the next day we'd be filming in the middle of a forest that felt enchanted. Then we'd be at the Guinness estate filming next to the lake. It was just the beauty of it and the fun.

"I also threw kind of my first party ever and the Irish are a really fun bunch to party with. It was a good time."

Hathaway says that despite previous remakes "there's just something good" about the story that keeps on luring viewers in.

"The version from the '80s is an adaptation of a previous version starring Marlon Brando and David Niven.

"There's something about the story that wants to be retold - a con artist getting her start who is kind of on the lower end of the spectrum and wanting to be taken under the wing of another con artist who's much further along in her career. There's just something good about it!"

Asked if she ever had to hustle in life to get something she really wanted, Hathaway declared: "I'm still hustlin' baby!

"You don't ever, ever, ever get to stop. But it's not like a hustle like a con; it's just part of the job, you got to go out there and do it.

"I will say, I think I hustled for Catwoman [in The Dark Knight Rises]. I'm also lucky because I've representatives and they hustle for me too," she joked.

"There have been a few jobs where I think people weren't necessarily that interested in me for them and I've had to turn their minds."

The Hustle hits cinemas nationwide on May 10. 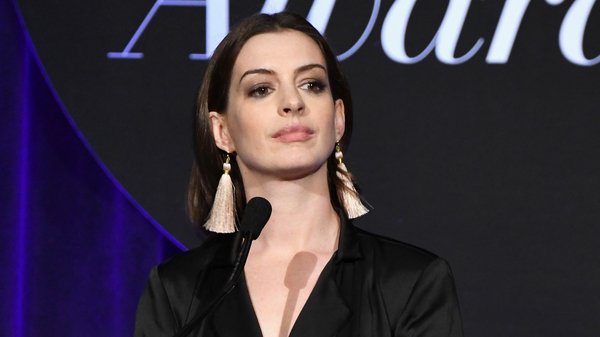 Anne Hathaway quit drinking to be there for her son