Spencer Matthews has started a new job with the Good Morning Britain team as Editor Of Show Business, filling in for Richard Arnold.

However, the reality TV star's first appearance on the ITV breakfast show did not go down a storm with viewers, with many taking to Twitter to criticise his "wooden" performance.

He has now apologised to fans, posting a picture of himself on the show on his Instagram page and writing: "Such a huge amount of respect for people who regularly present live television – it’s a skill and it’s not easy.

"Had my first go this morning on @gmb and it’s safe to say that it didn’t go so well... Apologies for my lack of experience and wooden performance. I’ll loosen up and get better with time, hopefully!"

The programme is hosted by Richard Madeley and Kate Garraway and the husband of Vogue Williams will be in charge of keeping viewers abreast of all the latest entertainment gossip.

The pair have endeared themselves to people in Ireland and England with their quick wit and general laissez faire attitudes depicted on the Channel 4 reality show that finished in the last month.

Spencer has even learnt a few cúpla focal along the way, but not the polite stuff.

Speaking about his new role he said: "I’m an avid viewer of the programme as I am up early with my newborn and nothing prepares you for the day quite like watching Piers’ brilliant rants – of which both my son Theodore and I are fans."

Spencer was previously a trader, who then worked in PR, got involved in television in 2011 when he was part of the British reality TV programme Made In Chelsea, which he was on for five years.

In between filming Made In Chelsea he was The Bachelor on The Bachelor in 2012, he caused controversy in I'm A Celebrity in 2015 where he only lasted three days as he was preparing for a charity boxing match.

It was on Channel 4’s The Jump in 2017, that he won not only the ski jump but also Vogue Williams' heart and got married last August.

In between times he was employee of the season in Five Star Hotel and reached the finals of the most recent series of Celebrity MasterChef back in the autumn. 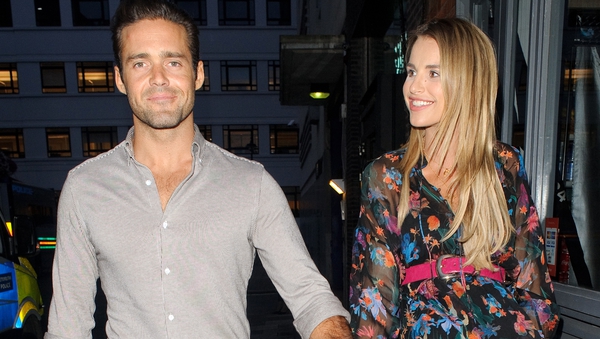 Spencer, Vogue and Baby Too