Rebel Wilson has said that she never expected Liam Hemsworth to be funny before they made movie Isn't It Romantic because he is "so hot".

The two Australians actors star together in new romantic comedy and speaking on The Ellen Degeneres show, Wilson said, ''Normally, people that are so hot like that aren't that funny.

Catch me on @TheEllenShow TODAY and again on Valentine’s Day for a special extra! ?? pic.twitter.com/NG5NxipTcp

''Turns out, he's just such a legend and the funniest guy, so it was a good move for me casting him.''

The Pitch Perfect actress did say he had the looks, but maybe not the moves but that when he danced he ''really gave it his all''.

Hemsworth did not make the premiere of Isn't it Romantic as he was hospitalised with kidney stones. His wife Miley Cyrus attended the premiere in his place.

Sorry I couldn’t make it to the @isntitromantic premier last night guys. Been dealing with some pretty annoying health stuff the last couple days. Lucky I have the best girl in the world to represent for me! Thanks for the support babe! pic.twitter.com/lcit8Nz3CY

Wilson said: ''He texted us this morning - he was in hospital overnight, so hopefully he will be fine.''

The time is NOW! ISN’T IT ROMANTIC is only in cinemas across North America right now! So grab your girls, guys or just yourself and go see our film made with love for you! ?? pic.twitter.com/8GZ92WElbu

Cyrus took to Instagram to give an update on Hemsworth with a series of snaps of herself attending the premiere in her spouse's place, and gushed about how ''proud'' she is of her ''hunky hubby'' and his new comedy flick.

The 26-year-old pop star also admitted it was ''hard'' for Hemsworth to put himself first, but said it was ''crucial'' for him to ''heal'' properly before returning to work.

Isn't It Romantic comes to Netflix in Ireland on February 28. 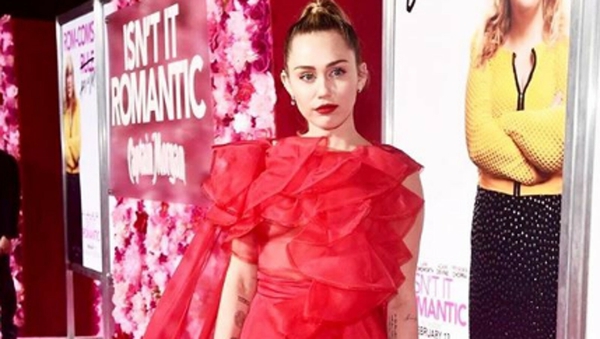 Cyrus steps in for ill Hemsworth at movie premiere