Brian McFadden and his professional partner Alex Murphy scored 22 points on Dancing on Ice and avoided a skate-off despite a fall at the beginning of their routine.

Luckily his score was still good enough for us to get to see him skate again next week.

His mum and two of his daughters were in the audience supporting him.

Comedian Richard Blackwood and Saira Khan had to skate for their place in the competition and then were voted off. Blackwood said he was "disappointed" but that it was "all good".

Blackwood and Khan found themselves in the bottom two after a public vote.

Judges Jayne Torvill and Christopher Dean, Jason Gardiner and Ashley Banjo then had to decide who to save and who to eliminate, and opted to keep Khan on the ice.

Blackwood is the second contestant to leave the programme, after Australian actor Mark Little was sent home last week.

Elsewhere, there were clashes on ice as contestant Gemma Collins argued with judge Jason accusing him of allegedly selling stories about her being a "diva", which she has said is not true.

Gemma said it had been "a hell of a week" and that it had "knocked my confidence".

Hosts Holly Willoughby and Phillip Schofield then interrupted and suggested they get back to discussing skating.

Meanwhile, the unconfirmed rumoured Posh Spice Girl replacement or just a Wannabe for the tour, Saara Alto sang while she skated:

Last week Brian McFadden impressed the Dancing On Ice judges, despite injuring his shoulder during rehearsals.

The former Westlife singer skated to Westlife's rendition of Mandy with his professional partner Alex Murphy.

Earning 20 points out of a possible 40 from the judges, McFadden was happy with his score, and it was enough to keep him out of the dreaded skate-off.

"It's been tough but we got through, and I'm happy," McFadden said.

McFadden's participation in the show had been called into question after reports emerged that he had dislocated his shoulder during rehearsals.

Dancing On Ice airs on Sundays on Virgin Media 1 at 6pm. 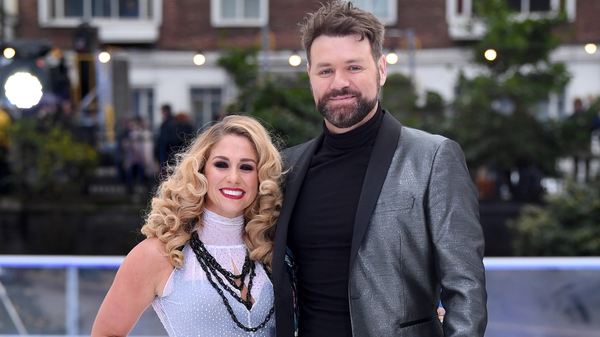 Brian McFadden skates through on Dancing On Ice