Stan & Ollie stars Steve Coogan and John C Reilly have told RTÉ Entertainment that they still choke up when they watch their film about Laurel and Hardy's final tour of Ireland and the UK, and that they did not expect that working on the biopic would move them so much.

The acclaimed biopic, which has just opened in cinemas, follows Stan Laurel (Coogan) and Oliver Hardy (Reilly) as they embark on a gruelling 1953 tour in a bid to turn their showbiz fortunes around, with old wounds yet to be healed along the way.

"I get really emotional when I watch the film now," Reilly told RTÉ Entertainment at Dublin's Olympia Theatre, where Laurel and Hardy performed.

"I cry quite a bit when I watch the film. And it's not because I'm so moved by my own performance or even Steve's performance, it's because it makes you think about Oliver and Stan."

"When you're in this business you watch a movie and you're always aware that you're watching a movie," Coogan explained. "You go, 'Well, that's an actor. I know that actor'.

"Occasionally you watch a movie that's so good you forget you're watching a movie. Even though we're in the profession, you just get lost in the story. And that's great when that happens, and very unusually it happens in a film that you're in!

"But there were times watching it when I do get lost in watching Stan and Ollie's relationship. And I can't think of a better tribute than that."

"The 'more effortful' scenes to do were the dances and the songs and the comedy routines, but the more difficult things to do were those emotional scenes - the vulnerability that we show each other," Reilly recounted.

"You know, Steve and I had to really get to know each other quite well before we could get to the place of crying in front of each other or having that terrible fight that they have. Steve and I wrote some of the dialogue for that scene and it's cruel what they say to each other. It was hard to be cruel to each other like that."

"In a way that's believable," Coogan added. "It's funny, when you do technical stuff like dances or sketches, you can make that better by rehearsing it over and over and over again. You can't make a scene more truthful, more emotional by doing it loads and loads of times.

"You have to arrive at that place by sort of slowly building something up over weeks of getting to know each other and trusting each other and being in a place where you feel like you can do that. I felt like we had done that because there's a scene in the bedroom where John's bedridden as Oliver and I'm sitting next to the bed... When I watch that back now it does feel quite emotional. It feels real."

Stan & OIlie is in cinemas now.

Coogan and Reilly also joined in the fun on The Late Late Show on their visit to Dublin: 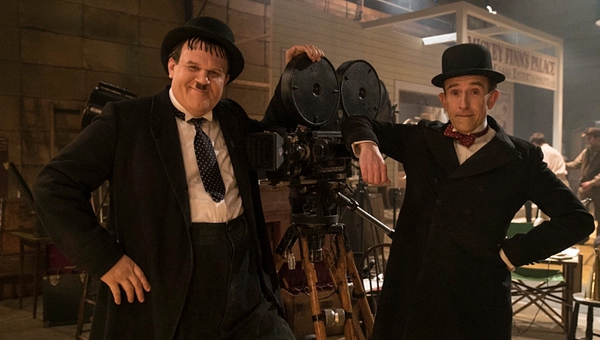 Stan & Ollie a match made in Movie Heaven