We're giving you the chance to win preview tickets to see Christian Bale's Golden Globe-winning performance in the new film Vice in Dublin next Tuesday, January 15, at 7:00pm.

The makers of the movie say: "From Academy Award-winning writer/director Adam McKay (The Big Short) comes the audacious and subversively comedic Vice, an unconventional behind-the-scenes look at former Vice President Dick Cheney's stealthy rise from Congressional intern to the most powerful man on the planet. 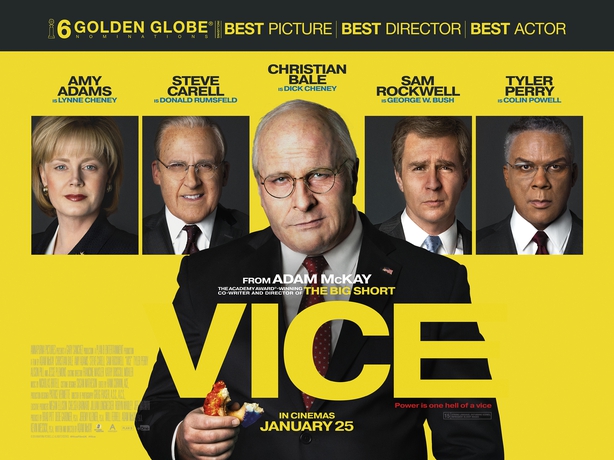 "Fully inhabiting the role of the highly secretive title character who changed the world in ways few leaders have over the past 50 years is Oscar and Golden Globe winner Christian Bale, heading an all-star cast that includes Oscar nominee Steve Carell as the affable, yet steely Donald Rumsfeld, Oscar nominee Amy Adams as Cheney's ambition-driven wife and Oscar winner Sam Rockwell as the malleable George W Bush."

Vice opens in Irish cinemas on January 25, cert 15a.

To be in with a chance of winning tickets to the preview in Dublin on Tuesday, January 15 at 7:00pm, just answer this question:

Who does Christian Bale portray in Vice?

Send your answer, name and address, marked Vice Comp, to entertainmentonline@rte.ie. One entry per person. Closing date: Monday, January 14. Prize is for tickets to preview screening in Dublin at 7:00pm on January 15 only. No costs will be covered. No cash alternative.