Tributes have been pouring in for the late Marvel co-creator Stan Lee, with Captain America star Chris Evans saying he has left "an indelible mark" on so many lives.

Lee died at the age of 95 on Monday in Los Angeles.

"There will never be another Stan Lee," Evans shared on Twitter.

"For decades he provided both young and old with adventure, escape, comfort, confidence, inspiration, strength, friendship and joy. He exuded love and kindness and will leave an indelible mark on so, so, so many lives. Excelsior!!"

There will never be another Stan Lee. For decades he provided both young and old with adventure, escape, comfort, confidence, inspiration, strength, friendship and joy. He exuded love and kindness and will leave an indelible mark on so, so, so many lives. Excelsior!!

Hugh Jackman said he feels "proud" to have been a part of Lee's world by bringing his character Wolverine to life on the big screen.

We’ve lost a creative genius. Stan Lee was a pioneering force in the superhero universe. I’m proud to have been a small part of his legacy and .... to have helped bring one of his characters to life. #StanLee #Wolverine pic.twitter.com/iOdefi7iYz

The 22-year-old played Peter Parker in 2017's Spider-Man: Homecoming and will reprise the role in 2019's Spider-Man: Far From Home.

Holland shared a picture of himself seated next to Lee to his Instagram account, with the caption "How many millions of us are indebted to this guy, none more so than me. The father of Marvel has made so many people so incredibly happy. What a life and what a thing to have achieved. Rest in peace Stan."

President of Marvel Studios Kevin Feige spoke of Lee's "extraordinary legacy" and the impact he had on his career.

No one has had more of an impact on my career and everything we do at Marvel Studios than Stan Lee. Stan leaves an extraordinary legacy that will outlive us all. Our thoughts are with his daughter, his family, and his millions of fans.  #ThankYouStan  #Excelsior!

Entrepreneur Elon Musk spoke of how the "imagination and delight" he created will last forever.

Thank you Stan Lee for making people who feel different realize they are special.

Rest in peace, Stan Lee. The many worlds of imagination & delight you created for humanity will last forever.

Damn... RIP Stan. Thanks for everything. pic.twitter.com/TMAaDJSOhh

The official Twitter account for The Big Bang Theory shared a photo of Lee on set with the cast, with Lee having appeared on the show in it's third season.

In loving memory of Stan Lee. It was an honor to have him on The #BigBangTheory. Thank you for being a real life super hero to so many generations. Your legend will live on. pic.twitter.com/OHWdbHQPYC

Director Edgar Wright, who was previously attached to Marvel’s Ant-Man, thanked Lee for inspiring him.

Stan Lee, RIP. Thanks for inspiring so many of us to pick up a pen or pencil and put your dreams onto paper. Excelsior! pic.twitter.com/L33eTjUQdI

Other stars have also taken to social media to pay their respects to the late icon:

Thank you Stan Lee. For your service in protecting our freedom and for your creativity and imagination! You were and will always be a SUPER HERO! pic.twitter.com/d1qpuImyzQ

I was a happy little boy lost in the sanctuary of my Spider-Man comic books, collecting em, savoring each one, the piles of comics stacked high next to my bed. Thank you Stan Lee, what a… https://t.co/w1MK6i9yrY

Thank u Stan Lee for everything.

With Stan Lee, at The Hollywood Bowl in 2012. Rest In Peace Stan! 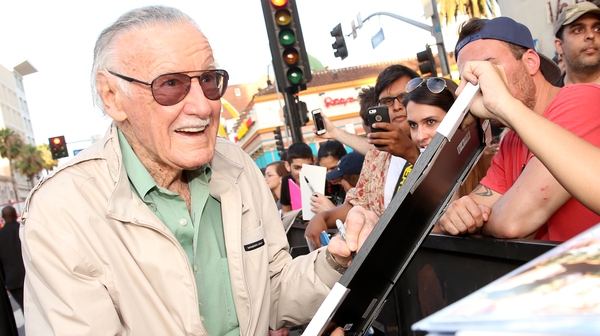