Benedict Cumberbatch told RTÉ Entertainment that it took him just a "heartbeat" to take on the role of The Grinch, a character whose heart was two sizes too small.

Cumberbatch voices the character in a new animated film from the studio behind Despicable Me and he admitted it was an instant yes for him when the role came his way.

"It didn't take me a heartbeat to say yes," Cumberbatch told RTÉ Entertainment.

Watch our interview with Benedict Cumberbatch:

While many will be familiar with the films about The Grinch that have come before, Cumberbatch feels there is an important message in the film to share with a new audience who might not know the story already.

"I think that central theme, that Scrooge journey he goes on from being an outsider who is lonely and angry and full of spite and hate, who doesn't know how to love because he hasn't been loved or he's had his heartbroken or been upset," Cumberbatch said.

"Or in the case of this character, he's an orphan, so Christmas triggers horrible memories of being on his own and not sharing everything the Whos – who are practically high on Christmas, I mean it's like living in a crazy Christmas market that place – they all belong together through community and family and he's never been given that as an orphan.

"So once you see that, that journey of a man, or a Grinch, from isolation and fear and anger and hate, into apologising, being accepted and love and kindness, that's a good thing to put out in the world I think."

To be in with a chance to win some Grinch goodies, head over to our Facebook page: 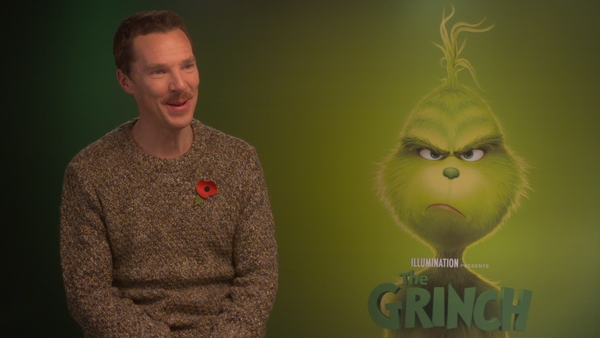 Benedict Cumberbatch gets Grinchy about plastic