Brendan O'Carroll has revealed that he only began playing Mrs Brown after the actress first cast to play her fell ill.

Appearing on The Jonathan Ross Show this Saturday night, Finglas man O'Carroll (63) says: "I went home and wrote the first five episodes and got anybody I knew who could come in and record a voice [for example], Bugsy who plays Grandad. He was my window cleaner.

"I had an actress booked to play Mrs Brown, but she had a kidney infection and couldn't come in and I’d already paid for the studio. So I thought I'd record everything, I'll do her lines and when she's well I'll dub her voice in."

However, he was told by impressed bosses that he should take on the role full time before Mrs Brown first appeared on Gareth O'Callaghan's show on RTÉ 2FM in 1992.

"I started Mrs Brown on the radio. A radio DJ invited me in and used to get fellas in who were currently gigging to read some wacky stuff out of newspapers," O'Carroll said.

"Afterwards we had a cup of coffee and off the top of my head I said, 'I'm writing a comedy soap opera, five minutes, five days a week. It'd be great on radio'.

"He asked me what it was called and on the way in to the studio I was listening to the news and it was Louise Brown's 18th birthday, who was the first test tube baby, and she'd changed so many lives with that one event and I was thinking about the Browns so I said, 'Mrs Brown’s Boys'."

O'Carroll also tells Ross: "Sadly a couple of elderly gentlemen come up to the door with flowers and want to ask her [out]. What the security staff do is [say] 'We’ll make sure she gets the flowers'."

Anjelica Huston played the indomitable matriarch in the 1997 movie Agnes Brown and Mrs Brown's Boys made the move to television in 2011 when it became a regular on RTÉ and BBC, where it has run for 32 episodes.

It has also become a chat show on BBC One and RTÉ One and moved to the big screen again in 2014. O'Carroll has also said he is working on a Mrs Brown musical.

Boyzone also appear on the Jonathan Ross Show on Saturday at 10.35pm on ITV. 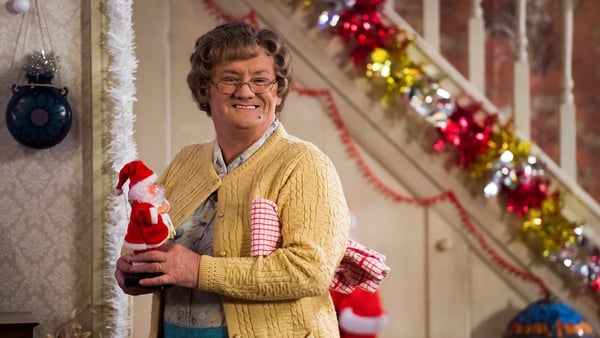