Last month, Wahlberg gave fans a glimpse into his daily life after he detailed a breakdown of his gruelling schedule on Instagram, which included a rudely early start, a series of workouts, and a morning session of the cryotherapy.

RTÉ Entertainment met Riz Ahmed and Tom Hardy in London to chat about their new movie Venom and we asked them if they had ever undertaken any intense preparations for a film role that would be similar to Wahlberg's.

#Venom star @rizmc tells us what he thinks of @markwahlberg's insanely early 2.30am wake up calls. "I'm worried about you bro!" pic.twitter.com/rXbcTT5ELJ

"Not like Mark Wahlberg!", Hardy responded, while actor and rapper Ahmed couldn't get over Wahlberg's 2.30am wake-up.

"Two thirty?! What time does he go to sleep? Why does he do that?!", Ahmed said.

When it was suggested that Wahlberg wanted to be ahead of the game, Ahmed replied: "But you could still get up at 4.30am or 5.30am and still be ahead of everyone else.

"Mark you need to get a bit more sleep man, I’m worried about you bro!"

"That's hardcore", Tom Hardy added with a laugh. "Good for him though man, do you know what I mean?"

Hardy previously revealed to RTÉ Entertainment how he took inspiration from Conor McGregor for the character of Eddie Brock in Venom, saying it was largely because the Irish MMA fighter "wants to have a scrap with everybody".

Venom is out in cinemas in Ireland on October 3.

Watch our interview with Tom Hardy and Riz Ahmed: 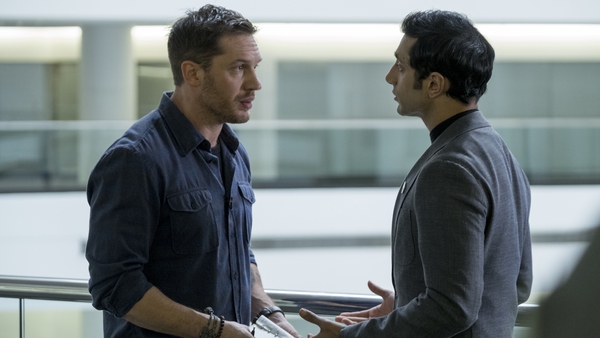 Tom Hardy, Riz Ahmed felt pressure to do justice to Venom from fans