Guardians of the Galaxy star Dave Bautista has told RTÉ Entertainment that he has a "man crush" on his Final Score co-star Pierce Brosnan, labeling the Irish actor a "beautiful person."

In Final Score, Bautista must track down Brosnan's character in a football stadium before the match reaches full-time in a bid to stop explosives from being detonated that will kill everyone in attendance.

Speaking about working with Brosnan, Bautista exclusively told RTÉ Entertainment, "It was amazing, I have a bit of a man crush on Pierce."

Watch our interview with Dave Bautista:

"He's just, everybody knows he's amazingly talented but until you meet him you don't realise what a beautiful person he is. He's just a good, good man, and I don't say that lightly," he continued.

Despite Brosnan being a former James Bond, and Bautista playing a Bond villain opposite current Bond Daniel Craig in Spectre, the topic of 007 didn't come up between the actors on set.

"We didn't really talk much about Bond," Bautista said. "We talked about everything; Pierce likes to talk about life in general and happiness and how he's found his way in life and the things he's dealt with and struggled with and I think that's why I connected with him."

Final Score will be available to watch on Sky Movies and in cinemas from September 7. 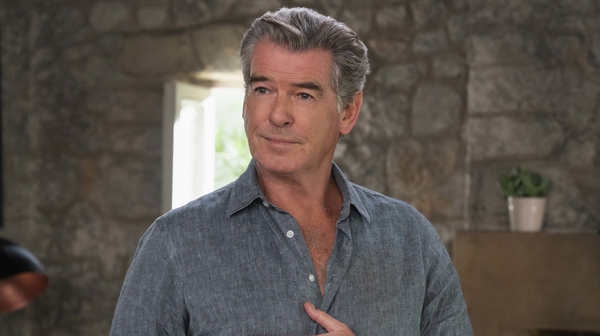 ABBA's Benny and Björn: Pierce Brosnan is a good singer