Television presenter Declan Donnelly and his wife Ali Astall have shared the happy news that they have welcomed their first child, a baby girl.

The couple revealed their joy on Twitter, with Donnelly writing: "Ali and I are thrilled to announce the arrival of our baby girl, Isla Elizabeth Anne, who was born just after 9 o'clock this morning [Saturday].

"Mother and daughter both doing well, Dad is head over heels!"

Ali and I are thrilled to announce the arrival of our baby girl, Isla Elizabeth Anne, who was born just after 9 o’clock this morning. Mother and daughter both doing well, Dad is head over heels! D x pic.twitter.com/LZ409o6kYK

Donnelly's presenting partner, Ant McPartlin, was among the first to offer his best wishes.

Welcome to the world baby Isla Elizabeth Anne. ?? Can’t wait for cuddles. I love you already!!

Donnelly and talent manager Astall married in 2015 with the news that they were expecting first reported in March. At the time, a source told British tabloid The Sun that the couple were "both absolutely delighted to be expecting - especially as they have been trying for some time".

Earlier this week it was announced that Holly Willoughby would be co-hosting the new series of I'm A Celebrity... Get Me Out of Here! alongside Donnelly as McPartlin continues his recovery following time in rehab for alcohol addiction.

"I am hugely grateful to Holly for agreeing to accompany me to Australia this year," Donnelly said. "She was at the top of my list and I'm thrilled she said yes.

"It will be a different kind of series but we will try our best to ensure it is no less fun and eventful for our loyal viewers.

"I am also pleased to hear Holly is scared of everything. I am almost stupidly excited at the thought of watching her during the eating trials!" 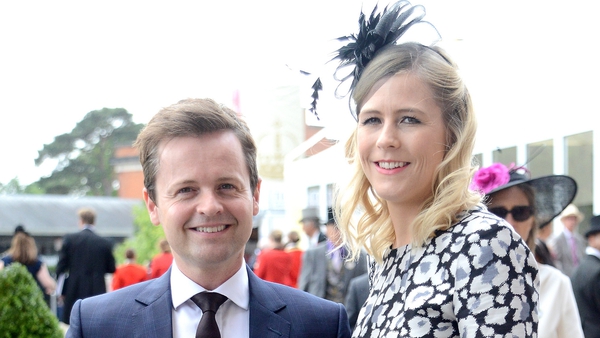