The Eurovision Song Contest Final takes place in Lisbon tonight but who are the ones to watch in this year's show? John O'Driscoll has been keeping an eye on the favourites and the oddities for glittery glory.

Now that the two semi-finals have been dispensed with, we know all the runners and riders in Saturday night’s Eurovision Grand Final. As expected there’s been a few high profile casualties along the way (the elimination of heavily fancied Belgium and Greece drew plenty of gasps) while the likes of Russia and Romania have seen their 100% qualification record obliterated.

But the big news from an Irish point of view has been the fact that not only has Ryan O’Shaughnessy made it to the final (wohoo!) but his odds of winning the competition have sky-rocketed since Tuesday night’s stunning performance and there’s credible talk now of a top five finish.

But amid all the pyrotechnics, frightening key changes, wind machine disasters and questionable lyrics e.g "I know you bop-whop-a-lu bop on his wood bamboo" * (Matron!!), the big question is - who’s going to snatch the wigs and title in this year’s competition?

Following this week’s semi-finals we’ve learnt a few things. 1. The days of so-called ‘block voting’ are well and truly gone 2. Song quality is triumphing and 3. Staging really really does matter.

One thing’s for sure, this year’s Eurovision competition is wide open…

John O’Driscoll has been taking a look at the finalists and has picked ten songs to keep an eye out for on Saturday night.

The One With Chicken Noises

Ever since the Israeli song, Toy, dropped, fans and bookies alike have been hailing it as the song to beat, however it’s odds of winning have fallen back somewhat since the first semi-final. A contemporary feminist anthem, which appropriates hot button issues such as the #MeToo movement, it’s got topicality and originality going for it spades. Oh and the chorus features a chicken clucking…

Needless to say on first listen it does suffer from a WTF! quality but a quick perusal of the lyrics and it (should) become apparent that she’s calling out feeble minded blokes for being too cowardly i.e chicken. Simples! It’s performed by an immensely talented 25-year-old singer Netta Barzilai who uses a ‘looper’ to record her vocals live and loop them over the performance so it’s definitely a performance to tune in for. It could go all the way - or become the biggest poultry debacle since we sent the Turkey over.

France haven’t won the Eurovision since way back in 1977 and after years of sending pure muck they’ve recently raised their game. Mercy (not Merci) performed by the group Madame Monsieur is one of their best efforts in a long time. A very catchy melody and lyrics which references the ongoing migrant crisis in the Mediterranean (the song refers to a young girl called Mercy who was born on a migrant boat) this should see them comfortably finishing somewhere in the top five and on a good day it could sneak into top place especially with help from the juries.

Wait a sec...  Isn’t Norway’s entrant that cherub-faced young lad who won the competition back in 2009 by one of the biggest margins ever thanks to his fiddle playing and winning smile? Well spotted.

Yes, Alexander Ryback is eh, back (complete with his fiddle) hoping for a second tilt at glory with meta effort entitled That’s How You Write A Song? (Answer: with toe-curling Nickelodeon-level lyrics apparently). But as keen Eurovision observers know, for every Johnny Logan there’s a Niamh Kavanagh when Lady Luck fails to shine a second time. In this case, it looks like it’ll be the latter category. This is so cheesy that it should come with free packet of Tuc biscuits but you’ll hate yourself for humming it after just one listen.

If you were lamenting the lack of 'Yass Queen'/Beyoncé tributes in the competition then you can finally exhale. This year Cyprus have come to slay and after last Tuesday’s semi-final they are now the favourites to bag their first ever win after a knock-out performance. Fuego performed by Eleni Foureira is one of the more in-your-face and ahem, fiery Eurovisiony anthems in the competition and pushes all the right up tempo and ethnic sounding buttons. Apart from borrowing more than a few moves and hair flicks from Queen Bey, expect the wind machine to be turned up to eleven once again during the live performance.

A week ago plenty of observers were saying that while Lithuania had a beautiful and poignant song, it would never survive the cull from Tuesday night’s ‘group of death’ semi-final. They were very wrong. Not only is it in the final, the song When We’re Old has become a bone fide dark horse in the competition thanks to Leva Zasimauskaite’s haunting vocals (reminiscent of the late Dolores O’Riordan) and the touching lyrics about growing old with the person you love. A universal message that will resonate with voters, it will do very well on Saturday.

The Czech Republic’s Mikloas Josef was always going to do well thanks to a) a ridiculously catchy chorus and b) the fact that he’s not exactly hard on the eyes. Admittedly the lyrics on Lie to Me sound like they were written by an English-language exchange student headbutting a keyboard (*see above), while it’s also hard not to do a Fr Ted halfway through by screaming: "we need to lose that trumpet solo!"

Still he’s mad about his backpack and there’s lots of flossing to keep you distracted (ask an eleven-year-old if you need to).

The One Keeping Her Lit

Rounding off the trio of ladies in contention for the Eurovision title (alongside Israel and Cyprus) we get to Estonia’s Elina Nechayeva and her song La Forza. This year they have taken the less well travelled route with an absolutely delightful piece of soaring pop-operatic bliss - sung in Italian. Obviously.

Elina’s voice makes it a performance to remember- just wait for that high note at the end - this is a strong contender for the top spot and is, as the kids say, well lit (literally). Be sure to watch out for her gúna . . . rumour has it that the entire Estonian national grid has been harnessed to power the projections on the dazzling frock.

Q: Who are your influences Hungary?

A: Animal from The Muppets

You might want to step back from the television for this one.  A journey into the dark dystopian heart of Eurovision, this clatter of metal from a bunch of Hungarian rockers, AWS, should help to wake you up and send the cat fleeing in terror to the kitchen. Literally, the entire pyrotechnics budget for the whole Song Contest, is used up in these three minutes. I haven’t a notion what the song Vislát Nyáris is about, but as an expression of deep rooted existential angst in a world gone mad, it’s hard to beat.

Look it wouldn’t be Eurovision without something utterly barmy. Unfortunately for lovers of Euro kitsch, the semi finals are now very effective at dispensing with the trolling entries. Thankfully Moldova managed to sneak through from Thursday’s semi-final, thanks to poor competition and the enduring love that exists for Balkan Ska. Yes you heard right. The song, My Lucky Day, sounds like it the ideal soundtrack to a chase scene in a Borat sequel, while the naff Carry On/peek-a-boo staging elevates it to guilty pleasure perfection.

The Pride Of The Nation

After a five year absence in the Eurovision final, Ireland are back with a bang with one of our best songs in a long time. Ryan O’Shaughnessy and the rest of the Irish team put in a stunning performance on Tuesday night. Not only did Together get one of the best reactions on the night thanks to its inclusive message and clever staging, it bagged the last qualifying slot after a nerve shredding wait.

After being written off by the bookies only a week ago, Ryan and co are now the third favourites to win and we couldn’t be more proud or happier as a nation. Leaving aside the controversy over censorship by a Chinese broadcaster, the song has been winning over hearts - and potential votes - all week long and our fingers and toes are crossed for a very good placing in Saturday’s final. Dare we dream of a record-breaking eighth win? Stranger things have happened....the fact that we’ve been drawn third last is also a huge boost as the song will be fresh in viewers minds come voting time. C’mon Ireland! 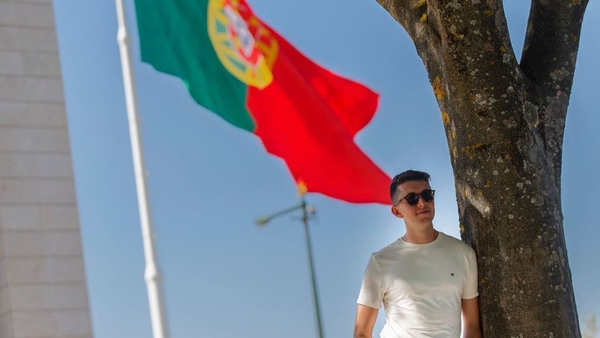