The countdown to the Eurovision Song Contest Final has begun, with Ireland competing in the first semi-final on Tuesday night. John O'Driscoll takes a look at the top countries to watch in this year's musical extravaganza.

Yes it’s that time of the year again. With the inevitability that arrives only with death, taxes and a five-day Irish summer, Eurovision is upon us again in all its glittery shambolic glory. This year there’s an eye-watering forty-three countries taking part including, er Australia (because apparently that’s now a permanent thing), slugging it out over two semi-finals for a place in the Grand Final next Saturday, May 12.

But amid all the pyrotechnics, frightening key changes and a copious amount of wind machines, the big question is - who’s going to snatch the wigs and title in this year’s competition? And has Ireland any hope of breaking its current miserable streak of non-qualification?

To help you navigate this year’s entrants, John O’Driscoll has picked out a dozen songs to keep an eye on during this year’s Song Contest extravaganza.

Say hello to this year’s raging hot favourite. Ever since this song dropped, fans and bookies alike have been hailing it as the one to beat. A contemporary feminist anthem, which appropriates hot button issues such as the #MeToo movement. It’s got topicality and originality going for it spades. Oh and the chorus features a chicken clucking….

Needless to say on first listen it does suffer from a WTF! moment but a quick perusal of the lyrics and it (should) become apparent that she’s calling out her ex or feeble-minded blokes in general for being too cowardly i.e chicken. Simples! It’s performed by an immensely talented 25-year-old singer who uses a ‘looper’ to record her vocals live and loop them over the performance, so it’s definitely a performance to tune in for. It could go all the way - or become the biggest poultry debacle since we sent the Turkey over.

Now this is lovely. France haven’t won the Eurovision since way back in 1977 and after years of sending pure muck they’ve recently raised their game. This is one of their best efforts in a long time. A very catchy melody and lyrics that reference the ongoing migrant crisis in the Mediterranean, this should see them comfortably finishing somewhere in the top five and, and on a good day, it could sneak into top place especially with help from the juries.

Belgium have been one of the most consistent countries in the competition in recent years. After a fairly bleak run in the mid-noughties, when they failed to qualify for five years in a row, they turned things around and are now a Eurovision powerhouse with consistent top ten finishes (take heart Ireland!). This year’s entry proves that they still mean business. Imagine if Portishead recorded a Bond theme and you’re on the right track. One of the classiest tracks in this year’s competition, it deserves to do very well.

Wait a sec . . . Isn’t this that cherub-faced young lad who won the competition back in 2009 by the biggest margin ever thanks to his fiddle playing and winning smile? Well spotted.

Yes, Alexander is back (complete with his fiddle) hoping for a second tilt at glory. But as keen Eurovision observers know for every Johnny Logan there’s a Niamh Kavanagh, when Lady Luck fails to shine a second time. In this case, it looks like it’ll be the latter category. This is so cheesy that it should come with free packet of Tuc biscuits. But, it’s also so bad that it’s good (listen to those toe-curling lyrics) and you’ll hate yourself for humming it after just one listen.

Speaking of people you might recognise, if it isn’t herself from The X-Factor two years ago. The Finnish songstress with the big voice is hoping to bag a place in the final with this club banger about self-empowerment and being true to yourself, inspired by her recent decision to come out as gay. The contest's massive LGBT fan-base will undoubtedly get behind the song, however it suffers from being in ‘the group of death’ semi-final (more on that later) and a sneaking feeling that 2008 is on the line looking for its sound back.

Now for something COMPLETELY different! After coming close to winning the competition four years ago with beautiful country song from The Common Linnets, the Netherlands are going back to the genre again with an absolute belter of a tune. Pure American country-rock, this is one of the best songs in the competition. Guaranteed to make it to the final, this could do very very well. Tip o’ the stetson to you, sir!

From country-rock…..to pop opera! Estonia have also taken the less well travelled route this year with an absolutely delightful piece of soaring operatic bliss - sung in Italian. Obviously. Elina’s voice is sure to make it a performance to remember - just wait for that high note at the end. A strong contender for the top spot. Watch out for her gúna on the night as well. Rumour has it that the entire Estonian national grid has been harnessed to power the projections on the dazzling frock.

Another song tipped to do well. Last year Bulgaria had its best ever result and finished second. Proving that wasn’t a fluke, they’re back with a powerful tune complete with a big soaring chorus that manages to channel enough Sia to make it ‘down with the kids’ and memorable.

As you might have gathered by now all the strongest songs this year are in the first semi-final. The Czech song should certainly survive the cull due to: a) a ridiculously catchy chorus and b) the fact that he’s not exactly hard on the eyes, so that’s the teenage girl vote sorted. Admittedly, it’s hard not to do a Fr Ted halfway through and break out in a sweat while demanding we lose 'the trumpet solo'.

The other ‘good-looking lad with radio-friendly tune package’ belongs to Sweden (Benjamin Ingrosso) which is in the second semi-final and will sail through as the Swedes can knock out conveyor-belt pop tunes like this in their sleep.

If you were lamenting the lack of 'Yass Queen' slash Beyoncé tributes on the list then you can finally exhale. This is one of the more Eurovisiony anthems in the competition and pushes all the right uptempo and ethnic sounding buttons. The video is bananas (literally) thanks to an extravagant amount of product placement, namely, erm, fruit. Apart from channeling more than a few moves and shakes from Queen Bey, expect the wind machine to be turned up to eleven during the live performance.

Last but not least to Ireland. No pressure on Ryan, but the weight of recent history in the Song Contest isn’t particularly kind as we’ve failed to qualify for the final every year since 2013. On the positive side, he’s a consummate performer well used to commanding a big stage and the song is absolutely gorgeous, definitely our best in years.


Fans of the touching video will be delighted to hear that the two dancers will be performing on stage with him. The inclusive message and clever staging will all help to elevate the performance and Ireland’s position as the second last song on the night will also give us a boost. Added to that, the UK will be voting in the first semi-final, so Ryan’s name recognition from his time on Britain’s Got Talent won’t do him any harm.

However, as we’ve already mentioned the first semi-final this year is a bit of a bloodbath so qualifying will be a tall order. Fingers crossed though.

Click here for more on this year's Eurovision Song Contest 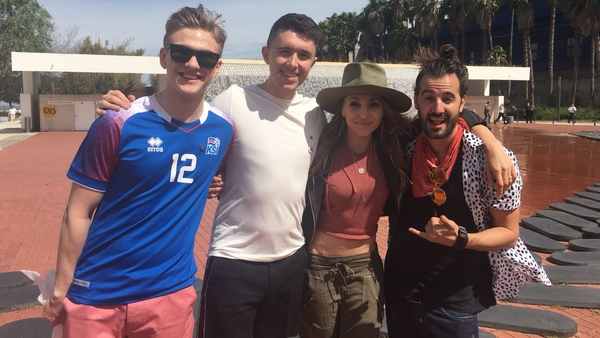